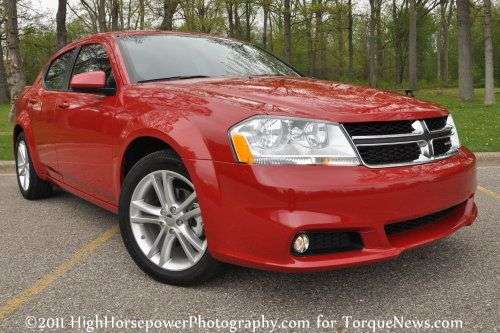 A week behind the wheel of the 2011 Dodge Avenger Heat

While the 2011 Dodge Avenger Heat features a revised interior and a subtly altered exterior, the biggest news for the new midsized Dodge sedan is the improved suspension system and the new premium engine option.
Advertisement

(This is part two of our review of the 2011 Dodge Avenger Heat…click here for part one.)

The main complaints with the early late model Avenger sedan was that the ride was rough compared to other vehicles in the class along with a general feeling of being underpowered. The underpowered portion has been fixed (and then some) thanks to the introduction of the new 3.6L Pentastar V6. This new V6 is used in nearly every new Chrysler Group vehicle with the exception of the Ram and Fiat brands (although the Dodge Journey is sold as the Fiat Freemont in Europe, powered by the Pentastar V6), with varying amounts of power depending on the application. For the 2011 Avenger, the 3.6L V6 makes 283 horsepower and 260lb-ft of torque – massive improvements over the outgoing 2.7L V6 that made just 186hp and 191lb-ft of torque.

This new 283hp V6 in the 2011 Avenger is mated to a 6-speed automatic transmission with a nice low first gear ratio, which helps to improve low end acceleration while still offering excellent fuel economy thanks to the 5th and 6th gear ratios. During my time in the 2011 Avenger, I got 30.8 miles per gallon during the course of my trip from Detroit to Indianapolis and back and over the entire course of my drive time in the Pentastar-powered Avenger; I averaged 27.8mpg – both numbers that I would consider to be pretty impressive.

The other main complaint about the previous Avenger was the crude suspension setup but the Chrysler engineers put a tremendous amount of work into the suspension of the 2011 Dodge Avenger – work that is clearly evident as soon as you hit the streets in the revised midsized sedan. The 2010 Avenger I spent time in last year wasn’t a bad drive by any means but the suspension transferred more of the road surface than the average driver likes and this rigid suspension also didn’t yield the best handling abilities. On the other hand, the 2011 Avenger suspension offers a much smoother, quieter ride on all sorts of road surfaces; from smooth highways to unpaved dirt roads. Most importantly, the new suspension system, when coupled with the new Pentastar V6, makes the 2011 Avenger a great deal of fun to drive.

On the open road, the 3.6L V6 pushes the 2011 Avenger well into the range of the triple digit speeds and the new suspension keeps the car cruising as smooth as glass. The suspension and steering system work together to allow the driver a good feel for the road, minimizing body roll on the highway at high speeds but when you hit the twisty back roads, the handling capabilities really shine through. This setup allows the Avenger to cut through the turns with little understeer although if you deactivate the traction control system, the Pentastar V6 is more than willing to spin the tires as you exit hard turns.

The 2011 Dodge Avenger Heat isn’t designed to be a drag car and when you launch hard from a stop, the amount of power is slightly deceiving but as you climb into the rpm range, the little V6 really screams – giving the Avenger fantastic mid-range pulling power. The Pentastar provides a steady powerband through the mid and high rpm range, with the 6-speed transmission popping powerfully through the gears under hard acceleration (just as you would expect) but under normal driving conditions the transmission provides smooth, seamless shifts. When you stomp on the gas from a stop, the front tires require the help of the traction control system to get ahold of the road but once it does – away you go. The Avenger does face some torque-steer in the early mid range but as the transmission climbs through the gears, it effortlessly eclipses the 60mph mark and climbs towards the triple digits.

Sure, most people who are looking at the 2011 Dodge Avenger aren’t so concern as someone who is looking at something like the 2011 Dodge Challenger but the extra power and revised suspension system makes the new Avenger fun to drive without compromising the always-important fuel economy numbers expected of an affordable mid-sized sedan. In the end, the result of the Chrysler engineers’ efforts on the 2011 Dodge Avenger is a roomy midsized sedan with a comfortable interior, an aggressive exterior and a drivetrain setup that yields impressive fuel economy and exciting performance capabilities – offering consumers a great option to the likes of the Ford Fusion and Toyota Camry.

The 2011 Dodge Avenger hasn’t changed much on the outside but the differences that you cannot see – under the hood, under the car and inside are all deserving of a second look from those who may have passed off the previous Avenger as the “problems” from the prior model year vehicles have been erased by the alterations made to the 2011 Avenger.

Click here for the first part of the 2011 Dodge Avenger Heat review and check out the gallery below for a closer look at the Avenger from a variety of angles.

Other Chrysler News:
A week in the life of the 2011 Dodge Avenger Heat - inside and out
Chrysler's Ram brand delivers its first plug-in hybrid pickups
Calling all Chrysler fans – introducing the Mopar MoVenture
Win a NASCAR-inspired 2011 Dodge Charger R/T
Chrysler officially announces early repayment of the US and Canadian bailout loans
Dodge to bring back the Charger Super Bee