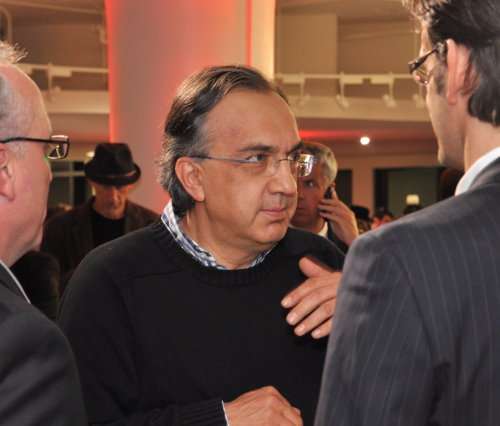 This afternoon, Chrysler and Fiat CEO Sergio Marchionne will speak at a ceremony at the automaker’s Sterling Heights Assembly Plant, where he will formally thank the US and Canadian governments for their financial support but more importantly, Marchionne is expected to announce that the company is paying off the $7.53 billion owed to the two governments.
Advertisement

Ahead of the upcoming 2:15pm ceremony to thank the US and Canadian governments for their financial assistance to Chrysler, the smallest of the Detroit Big 3 has announced the full repayment of the remainder of the bailout loans.

Chrysler has officially repaid the $5.9 billion owed to the U.S. Treasury and the $1.7 billion owed to Export Development Canada for a total expenditure of $7.6 billion. EDC is the holding company responsible for overseeing the Canadian Federal and Ontario Provincial governments when the two bodies agreed upon loaning money to Chrysler. This repayment comes over six years ahead of the payment schedule outlined when the massive loan was made two years back. In total, Chrysler has repaid $6.5 billion to the US government and $2 billion to the Canadian government over the past two years with roughly $1.8 billion of the total being interest-based expenses.

Chrysler points out in their statement announcing the repayment that they still have over $10 billion in liquidity, meaning that they have not run themselves short in an effort to get out from under Uncle Sam’s thumb. In paying off these massive loans so far ahead of schedule, Chrysler will save themselves around $350 million per year in interest expenses.

Chrysler and Fiat CEO Sergio Marchionne offered the following comments on this great day for Chrysler:
“Less than two years ago, we made a commitment to repay the U.S. and Canadian taxpayers in full and today we made good on that promise. The loans gave us a rare second chance to demonstrate what the people of this Company can deliver and we owe a debt of gratitude to those whose intervention allowed Chrysler Group to re-establish itself as a strong and viable carmaker.

Paying back the loans, along with the financial community’s investment in our refinancing packages, marks another step in the Company returning as a competitive force in the global automotive industry.

Everyone in the extended Chrysler Group family, from employees to union partners to dealers and suppliers, have worked tirelessly to deliver on our promises and to win back public trust in the Company and our products. There is more work to be done as we remain focused on fulfilling the goals outlined in our 2010-2014 business plan.”

Chrysler's repayment of the remainder of the $7.53 billion owed to the US and Canadian governments will not only remove the automaker from any control by the US government but it will also allow Fiat SpA to purchase and addition 16% of Chrysler. When added to the 30% that they currently hold, this would give Fiat a 46% stake in Chrysler and with the final incentive piece from the US government (requiring a Chrysler vehicle offering 40mpg), Fiat can gain the final 5% to give them a majority stake in Chrysler.

The ceremony to thank the US and Canadian governments begins at 2:15pm this afternoon to “acknowledge and express gratitude”. Marchionne spoke before a group of reporters last night at the official opening of Lakeside Fiat in Macomb, Michigan – letting the cat out of the bag. During his impromptu talk with local media, Marchionne proclaimed that "Tomorrow is payoff day. Chrysler will again regain its independence."

Chrysler and Fiat have raised the $7.53 billion needed to repay the “bailout loans” through loans and revolving credit lines, so while the debt still exists to the company – they will be out of debt with the two governments.

Marchionne also stated (and has in several past meetings) that he expects to acquire the last 5% needed to reach their goal of 51% ownership in Chrysler by the end of the year. This will be achieved by a vehicle from the Chrysler Group (Chrysler, Dodge, Ram, Jeep) offering 40mpg with the help of Fiat technology. The new Fiat 500 offers 30mpg around town and 38 on the open road so with a little help; the 500 could be the basis for the first Chrysler product to break the 40mpg barrier. Once that happens, Fiat will receive their final 5% from the feds. In addition to the 51% that Fiat will then own, the company could increase its stake in Chrysler to 76% by purchasing shares currently held by the UAW retirees’ health care trust.