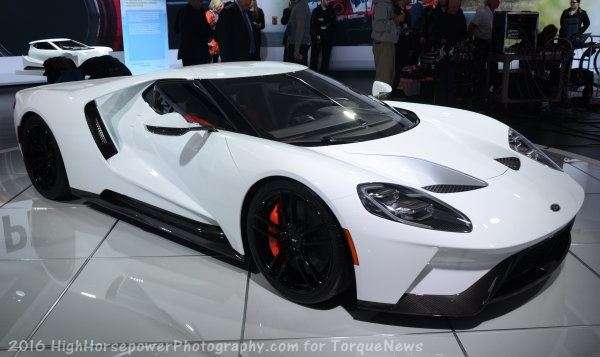 Ford Motor Company originally planned to build just 500 examples of the new Ford GT, spread over the next two years, but after receiving a huge number of purchase inquiries and deciding that they want to keep running production-based endurance racing – the automaker has decided to add two more years of production to the new carbon fiber supercar.
Advertisement

The Ford GT is the most advanced supercar ever offered by the Motor Company and since it was first revealed in concept form at the 2015 Detroit Auto Show, there has been a massive amount of interest from prospective buyers. Unfortunately, many of the thousands of folks who applied to buy a 2017 Ford GT were turned down, since the company will build just 250 examples for each of the next two model years…for the entire world.

While the US market will likely be the biggest consumer of the 2017 and 2018 Ford GT, those 250 units will be scattered across the world, so getting one has proven to be very difficult. After a lengthy application phase, Ford Motor Company sent out thousands of letters with bad news for those folks who had been turned down and 500 letters for those who would be getting the $400k supercar in the next two years.

However, after receiving so much interest – and after deciding to participate in the production-based endurance racing world for two more years – the automaker has extended their production plans into the 2019 and 2020 model years. This is a fantastic idea for Ford, as the demand is there, so if you can sell twice as many $400,000 supercars, why not make twice as many supercars?

“While we can’t build enough Ford GTs for everyone who has applied, we are going to produce additional vehicles in an effort to satisfy more of our most loyal Ford ambassadors,” says Dave Pericak, global director, Ford Performance. “We want to keep Ford GT exclusive, but at the same time we know how vital this customer is to our brand.”

The 2019, 2020 Ford GT
While Ford Motor Company has not announced the exact production details for the 2019 and 2020 model years, we can guess that they will continue on with the current plans of building 250 each year. In other words, total production should double from 500 units to 1,000 units global, and the automaker has already announced how they will go about allocating these extra carbon fiber supercars.

During the third year of production (2019), Ford Motor Company will consider those folks who were placed on the official wait list. Ford was clear that for the 2017 and 2018 model years, they wanted GT buyers to be folks with heavy Ford loyalty, experience with supercars and plans to either drive or race the car regularly. Based on those requirements, Ford picked the 500 people who would get to buy a 2017 and 2018 GT supercar, but the company also established a wait list – presumably comprised of those applicants who best met the requirements. Those “wait list” customers who want to apply for the 2019 model year will simply have to update their information with the company to apply for 2019.

The fourth year of production (2020) will be open to anyone who did not apply for the 2017-2018 models, or those folks who were rejected based on their initial application for the Ford GT. In other words, if you tried to buy a 2017-2017 Ford GT and you got rejected, your next shot could come in 2020.

“Ford GT has racing in its blood,” says Raj Nair, Ford executive vice president, product development, and chief technical officer. “The road car and race car will live on, side-by-side, for the next four years – providing ample opportunity to test and prove innovative new technologies both on and off the track.”