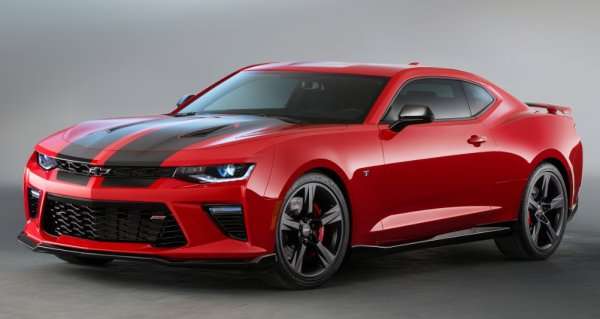 General Motors has released information and images of two more customized 2016 Camaro Concepts headed to the 2015 SEMA Show in Las Vegas – with both of these being production-friendly packages that owners can create from the GM performance catalog.
Advertisement

Late last week we brought you information on the 2016 Chevrolet Camaro Red Line Series that would make its concept debut at the upcoming 2015 SEMA Show and today, we get a good look at two more of the customized Camaros – both of which are based around a specific color package. These are both packages that a 2016 Camaro owner could piece together with the help of a good body shop, along with buying some of the nuts and bolts of the packages from the Chevrolet Performance catalog. GM has promised that the 2016 Camaro will have the largest collection of accessories available at launch of any generation Camaro, and along with the other Camaros on display – SEMA show-goers will get to see a great many of these items on display.

"These are great-looking examples of what customers can do to personalize their new Gen Six Camaro," said Roger McCormack, director, Accessories & Performance Parts Marketing. "This will be the largest-ever portfolio of Camaro accessories and performance parts. The possibilities are limited only by imagination."

In terms of functional bits, the Camaro Black Accent Concept has the aforementioned monster brake package and high performance suspension system, as well as a cold air intake kit.

2016 Camaro SS Red Accent Package Concept
Next, we have the 2016 Chevrolet Camaro SS Red Accent Package Concept, which started off as a Camaro SS Convertible in Switchblade Silver Metallic with an Adrenaline Red leather interior. On the outside, the SEMA team has added a unique lower grille insert with red inserts, black bowtie badges front and rear, red hash mark stripes on the fenders, and 20 inch gloss black wheels with a red stripe and red hash marks. Under the hood is a red engine cover and the massive calipers of the optional Brembo six piston brake setup are also finished in bright red. On the inside, the Camaro SS Red Accent Package Concept gets an interior illumination kit that applies a splash of light across the dash and door panels, red knee pads, bright sport pedal covers and the premium center console cover and floor mats with the SS logo.

Finally, while the Red Accent Camaro convertible has the optional dual mode exhaust setup available on all new SS-level Camaros, this show car features a cold air intake package and the new suspension lowering package that improves stance and performance.

Click here for a closer look at the Camaro Red Line Series Concept.