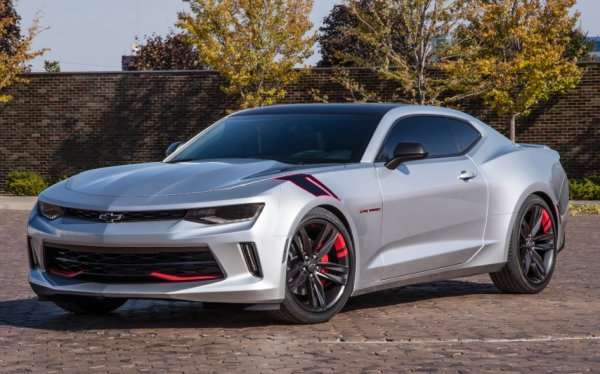 General Motors has started showing off the vehicles coming to the 2015 SEMA Show and Camaro fans will surely get their fill of 2016 models, with the first 6th generation Camaro to break cover being the gorgeous silver, red and dark grey Red Lines Series Concept shown here.
Advertisement

The 2016 Chevrolet Camaro will almost surely be one of the hottest topics at the upcoming 2015 SEMA Show and we can expect that the official General Motors displays will offer attendees a great look at their sleek new muscle car. Today we have our first preview of one of those Camaro show cars, with the Camaro Red Line Series Concept joining a collection of other new Chevrolet products sporting a similar appearance.

The goal with these vehicles was to create a sporty appearance package that could be offered across a variety and while the Malibu, Trax, Silverado and Colorado all look great in Red Line Series trim – today we are focusing on the 2016 Camaro.

Items on the Red Line Series Camaro that are available for sale as soon as the 2016 Camaro goes on sale include the red grille inserts, the black bowtie badges, smoked taillights, the Camaro door sill plates and the premium Camaro floor mats. Best of all, the Red Line Series Camaro is not just an appearance package at SEMA, as it also features a suspension lower kit, an air intake kit and the big brake package that are available immediately to those folks ordering their new 2016 Camaro.

I had a chance to check this car out in person yesterday and it really looks incredible with these minor exterior highlights. The silver, dark grey (graphite) and black make for a good looking muscle car, but the minimal red accents really set off this package. Even if GM doesn’t ever make the Red Line Series Camaro, this is a look that I can see owners copying when customizing their new Chevy muscle car.

Concept Now, Could Become Production
When the 2016 Camaro Red Line debuts next month at the 2015 SEMA Show, it will only be a concept, but the company is using the huge Vegas convention to gauge consumer interest on this package. Should it prove to be popular among the attendees and the media, there is a chance that you might be able to order a Red Line Camaro in the near future. Realistically, this Camaro could easily be built for production, as the hard components (lowering kit, the brake package, the air intake setup) are all available through the Chevy performance parts catalog while the dress-up exterior bits are just a little more work for the folks in the paint booth.

As mentioned at the top of the piece, this is likely just one of many 2016 Camaro coupes and convertibles that will be on display at SEMA and as more information becomes available on these new GM muscle cars – you will find it here on TorqueNews.com. Also, once the SEMA show has arrived, we will be bringing you more on all of the hottest vehicles from GM, Ford and Chysler.