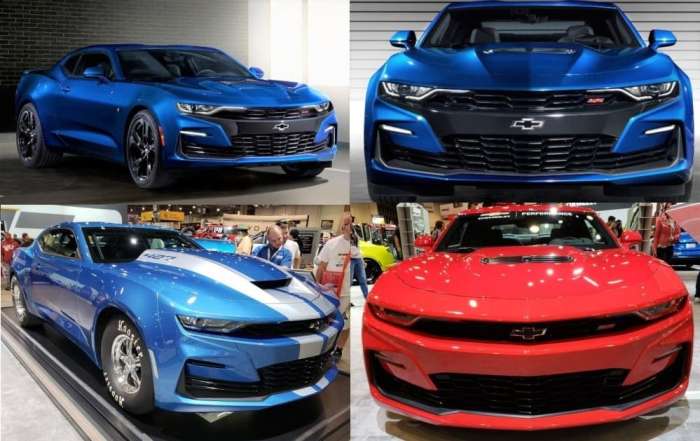 Chevrolet used the 2018 SEMA Show in Las Vegas to showcase what the company called a concept front end design, but with reports claiming that this will actually be the production front end very soon, we wanted to give you a look at the two designs side-by-side.
Advertisement

When General Motors first introduced the refreshed 2019 Chevrolet Camaro earlier this year with several different front ends, the SS models were sporting the look in the top pictures above. The bowtie logo is in the middle of the front fascia rather than in the upper grille and the middle of the front fasica is painted black, creating the illusion of a massive grille that covers the entire front end, from top to bottom.

People Hate the 2019 SS Face
That 2019 Camaro SS front end was met with loads of negativity from consumers, leading to a great many unpleasant memes mocking the new look of the volume V8 models. In fact, while the social media channels are often full of negativity, the distaste for the 2019 Camaro SS front end was rampant, both in groups of Chevy enthusiasts and groups of enthusiasts of other brands.

It seemed that the vast majority of people didn’t care for the new Camaro SS front end, so it didn’t come as a huge surprise when Chevrolet created a new “concept” front end for the LT1-powered muscle cars. Shortly after we got our first look at the SEMA-bound SS concept front end, reports from various sources online claimed that this concept front end could be fast-tracked to production, effectively serving as an emergency refresh.

We don’t know for sure if this new look will be offered on the 2019 Camaro SS production model, or if the brand will wait for the 2020 model year, but I think that it is a great idea. Sales are bad and when the internet is so vocal about disliking something, it is a wise move to make quick changes.

The New Look
The “concept” front end for the Camaro SS is shown in the lower images below, including on the newest COPO package – supporting the reports that this concept front end is quickly coming to production. It looks far better in my humble opinion, but more importantly for GM, there isn’t actually a whole lot of change. All they have done is move the bowtie badge up to the upper grille – where it belongs – and they painted the middle of the front fascia body color. This breaks up the all-grille look while preserving the basic front end lines of the 2019 refresh.

Hopefully the reports are accurate, as there is no question that the COPO Camaro and the red SS look a whole lot better than the images of the dark blue car.