The newest Ram 1500 Built to Serve package was announced this week, coinciding with the 73rd birthday of the United States Air Force, and this limited edition package is outfitted to pay tribute to the American airmen.
Advertisement

“Ram continues to honor all of those who serve or have served in the United States armed forces with distinction through our latest ‘Built to Serve’ offering,” said Mike Koval Jr., Head of Ram Brand, FCA – North America. “The ‘Built to Serve’ adage is something Ram truck owners, whether civilian or military, are very familiar with as it’s something we strive to build into every truck and van we produce.” Like the other Built to Serve trucks, this special package for the Ram 1500 is available on any body style and with any engine option. However, it is also limited like the previous models, with just 2,000 of these trucks slated for production. If you want one, it would be wise to reach out to your local dealership sooner than later. If you ordered one today, you could say that you ordered your Air Force-themed pickup on the 73rd birthday of the Air Force.

Built to Serve: Air Force Edition
Like the previous two Ram 1500 Built to Serve packages, this one is based around a pair of unique exterior colors. For these Air Force trucks, Ram selected Anvil (gray) and Billet Silver, with 1,000 of each slated for production. The package also includes 20-inch wheels in a unique Technical Gray finish, body-colored wheel flares, a black grille, black bumpers, black lighting bezels, black badges, black side step bars and four-inch exhaust tips poking out from under the rear bumper. The package is completed on the outside with an American flag on the rear bedsides On the inside, the Air Force Built to Serve package starts with unique diesel gray accent stitching on cloth sport seats. There are also Velcro panels on the sides of the seat, allowing the owner to add specific military patches from their carrier in the Armed Forces. Next, the cabin includes the Pouch Attachment Ladder System/Modular Lightweight Load-bearing Equipment storage system, a Built to Serve badge on the dash, Black Onyx Chrome trim and an optional locking console storage box. 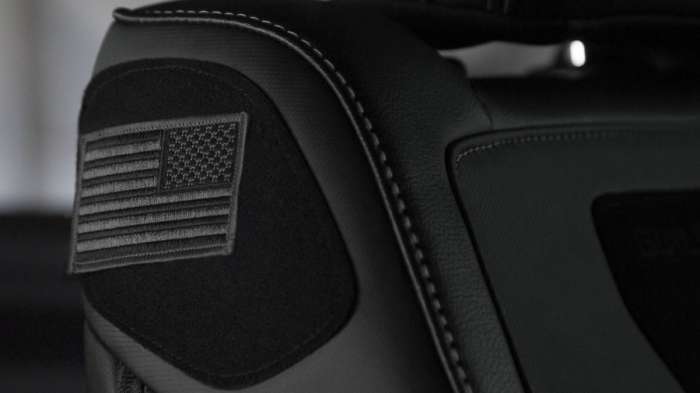 There is no set price for the Built to Serve trucks since there are so many possible configurations.