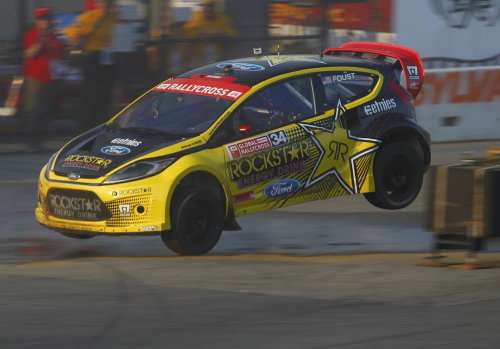 Tanner Foust has had a strong 2012 Global RallyCross season, putting himself among the leaders in all of the first four races of the year but in the most recent race held this past weekend at Las Vegas Motor Speedway, Foust did what he has not been able to do throughout the 2012 GRC season – winning the event final and setting up a two-car battle for the season championship with Ford teammate Brian Deegan.
Advertisement

Heading to the 5th race of the 2012 Global RallyCross season, Tanner Foust sat in the top spot for the season championship standings even though he had not won a race in any of his four previous tries this season. Foust managed to cross the finish line first in his Rockstar Ford Fiesta first in 3 of the 4 heat races in which he competed earlier this year but when it came to the final race of each event – Foust has fallen short of the top spot. Luckily, with a worst finish of the 2012 GRC season coming in the form of a 6th place finish at the X Games, Foust’s finishes of 2nd, 2nd, and 4th in the other three events leading up to this past weekend’s race in Vegas has allowed the host of Top Gear to hold the lead for the GRC championship.

Tanner Foust and his Rockstar Ford Fiesta did what they have done at all but one other event in the 2012 Global RallyCross season – easily winning his heat race and advancing to the event’s final race. Foust made short work of heat #1, driving away from Sverre Isachsen, Dave Mirra, Buckey Lasek and Richard Burton as the compact Ford handing a pretty sound beating to the rest of the field (which was comprised entirely of Subaru race cars). During this race, Foust set the fastest lap of the event with a time of 2:17.462. Isachsen was the other car from heat #1 to advance to the final.

In the second heat race of the day, Ken Block and his familiar DS Shoes/Monster Energy Drink Ford Fiesta took on Rhys Millen (Hyundai), Patrick Moro (Subaru), Andreas Eriksson (Ford, filling in for Marcus Grönholm) and David Binks (Ford). Block and Millen dueled throughout the short heat race with Block taking the win followed by Millen to advance to the final.

The third and final heat race of the Global RallyCross race at Las Vegas Motor Speedway pitted Brian Deegan and his Metal Mulisha Ford Fiesta against Toomas Heikkinen (Ford), Stephan Verdier (Hyundai), Samuel Hubinette (Saab), and Travis Pastrana (Dodge). As has been the case for most of the season, Brian Deegan was very fast as he held off Heikkinen for a win of less than a second. Heikkinen joined Deegan in the final race along with Block, Millen, Foust and Isachsen.

All of the drivers who did not finish in the top two spots in their heat race were sent onto the Last Chance Qualifier for their last chance with 8 drivers battling for the final four entry spots in the final race. Andreas Eriksson won the LCQ followed by Travis Pastrana, Stephan Verdier and Bucky Lasek while Patrick Moro, Samuel Hubinette, Dave Mirra and David Binks saw their night come to an end as they failed to advance to the final race of the night. This was especially painful for Hubinette who came into the Vegas race with a real chance at the season championship but in failing to make it to the final race, the Swede has removed himself from contention heading into the season finale at the 2012 SEMA Show.

The early going for the final race saw Tanner Foust, Brian Deegan and Travis Pastrana running out front until a turbo failure marked the end of the night for Pastrana’s new Dodge Dart – allowing Foust and Deegan to battle it out for the win in their similarly prepared Ford Fiesta rally cars. Foust hung on to win by about a second and a half over Deegan – giving him his first win of the 2012 Global RallyCross season and helping him to win the $25,000 2012 Discount Tire America’s Tire Cup that was based on the events in Texas, New Hampshire and Las Vegas. Foust was tied with Deegan coming into the race this weekend but his first win of the year brought home the $25k check from Discount Tire.

More importantly, the win in Vegas allowed Foust to distance himself from the rest of the field with only Brian Deegan close enough to make a run at the 2012 GRC championship when the cars run the final event at the 2012 SEMA Show. Foust currently has 72 points to Deegan’s 66 points with Hubinette sitting in third place with 50 points. Winning both your heat race and the event final brings about a total of 21 points which means that Hubinette (and the rest of the field except for Deegan) are mathematically eliminated from winning the 2012 GRC championship.

However, with Tanner Foust and Brian Deegen being separated by just 6 points heading to the season series finale at SEMA – we can expect some hot and heavy racing action by these two front-running Ford’s when the cars take to the track for the last time of 2012 on October 30th.