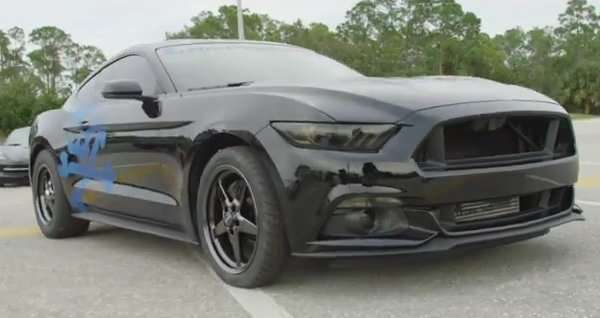 The new Ford Mustang EcoBoost offers an excellent mix of power and efficiency, but with some changes around the engine bay, the 4-cylinder Mustang will run deep into the 11 second quarter mile range – without any changes to the internal workings of the engine.
Advertisement

The 2015 Ford Mustang EcoBoost is the most fuel efficient muscle car in America, but with 310 horsepower and 320lb-ft of torque, it is also a great deal of fun to drive. The turbocharged 2.3L EcoBoost engine doesn’t pack the punch of the V8 in the Mustang GT, but it is a far more exciting engine option than the entry level V6 in stock form.

More importantly, private owners have found that with a little work, the Ford Mustang EcoBoost can lay down proper muscle car power and one of the leaders in modern Mustang performance is the crew at Lethal Performance. They put together a turbo kit that nearly doubles the output of the 2.3L 4-cylinder engine, allowing it to blast down the quarter mile in the low 11-second range and best of all – this kit doesn’t change any of the engine internals.

The 11-Second Lethal Mustang EcoBoost
The 2015 Ford Mustang EcoBoost in the video below is fitted with a turbo upgrade package from Lethal Performance, which adds a bigger turbocharger, a larger intercooler and all of the pipes and fittings needed to make the turbo and intercooler fit properly. It also has an upgraded fuel system and a good engine tune that brings it all together – and the result is 544 horsepower and 614lb-ft of torque at the rear wheels.

Lethal has also added a sticky set of tires on lightweight wheels, some suspension goodies, a stronger clutch and high strength, but other than the turbo kit, the engine tune and the exhaust system – the engine and transmission of this 2015 Mustang are stock.

When you couple that big turbo kit with the drivetrain and suspension upgrades and add a skilled driver, this 2015 Mustang EcoBoost lays down a stunning 11.1 quarter mile with a trap speed of 125 miles per hour.

Really, I don’t want to make it sound like this 2015 Ford Mustang is anywhere near stock, because it isn’t. I would suspect that the clutch, the half shafts, the driveshaft, the suspension upgrades and the rim/tire combo would cost a regular Joe a pretty penny, but the interesting aspect to this story to me is that the 2.3L EcoBoost engine with nothing but a turbo swap and a little extra fuel makes enough power to move the Mustang down the track in the low 11 second range, and with a trap speed of 125mph.

The Mustang EcoBoost might be an “efficiency engine” in stock form, but without opening up the engine, this engine will make nearly double the stock horsepower thanks to this $4,500 turbo kit.

The ability to run low 11s depends on the car, the track and – most importantly – the driver, but this video shows just how much potential the 2015 Mustang EcoBoost has with light modifications.