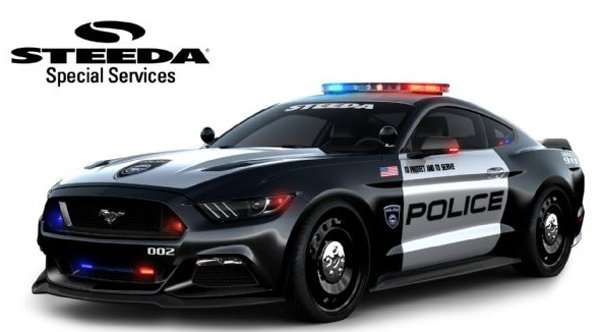 While some police forces around the country use Ford Mustang as pursuit vehicles, the Ford Taurus generally gets far more attention for its special service capabilities, but for those police officers who need a police which will run down pretty much anything on the road on the United States – Steeda now offers a police package for the Mustang GT that packs 777 horsepower.
Advertisement

Back in the 1980s, the Ford Mustang notchback was a popular police car in some locations around the United States, as their 5.0L V8 made them quick enough to catch many of the cars on the road. Fast forward to 2016 and there is a fairly long list of cars sold in the US that will easily outrun the basic Mustang GT, including a handful of cars that will tickle the 200mph mark. Sure, the 2016 Ford Mustang GT dressed up in police garb will run down most of the cars on the road, but what happens when an officer has to run down a Dodge Hellcat Challenger, a Chevrolet Camaro Z06 or a Lamborghini Huracan?

The Steeda Police Interceptor is up to the task, with an elaborate high performance suspension system applied to the Mustang GT, along with a supercharger package that lifts the output to 777 horsepower and 655lb-ft of torque.

The Steeda Mustang Q500 Police Interceptor adds the Steeda G-Trac Suspension/Chassis Stage I Package, which includes front and rear sway bars with welded solid billet ends, billet aluminum front sway bar mounts, billet aluminum rear sway bar mounts, a bump steer kit, an IRS subframe bushing support system, an IRS subframe alignment kit, billet aluminum vertical links, sport progressive-rate springs, camber plates and a performance wheel alignment. The result of this package is one of the best-handling Mustang GT’s imaginable, so while I can only think of a few situations where someone would need a road-race-ready Mustang for police duty – I’m sure that in some areas of the US, this would be a benefit to officers in catching crooks in high performance cars.

The Steeda Q500 Mustang Police Interceptor also includes a cold air intake setup, a cat back exhaust system and a performance engine tune to increase the output to 490 horsepower and 475lb-ft torque while the outside gets a unique front fascia to allow the engine to breathe a little better.

In addition to an even more elaborate and even more road-hugging Stage 2 suspension setup, the Steeda Q750 Mustang gets a Whipple 2.9L supercharged that lifts the output to a stunning 777 horsepower and 655lb-ft of torque. That is 5lb-ft more torque and 70 more horsepower than the mighty Hellcat Challenger, and while the company doesn’t state any official top speed or performance times – this lightweight muscle car should be able to at least keep up with Dodge’s supercharged brawler.

The Steeda Police Interceptor is available in both marked and unmarked form, but the performance capabilities are every bit as incredible regardless of the exterior design chosen. I don’t know how many of these cars will be sold, but for police departments who require some high performance muscle in their chase squad – the Steeda cop cars have them very well covered.