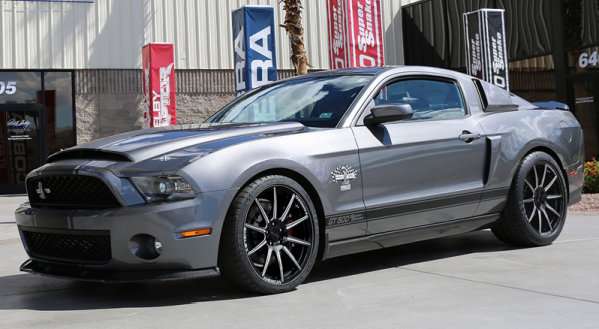 Although the performance world has turned its attention to the new Ford Shelby GT350 Mustang, the folks at Shelby American have rolled out one final limited edition package for the previous generation GT500 Mustang – with the new Signature Edition Super Snake packing up to 850 horsepower.
Advertisement

Throughout the duration of the previous generation of the Ford Mustang, Shelby American offered a collection of high performance packages for the mighty GT500. Aside from the extremely limited Shelby 1000 package, the most powerful option for those GT500 owners looking to make monster power was the Super Snake package.

As the S197 generation has officially come to an end, Shelby American has put together one final limited edition package for the GT500 Mustang and the appropriately-named Signature Edition Super Snake is the perfect swan song to the supercharger Shelby GT500.

"The Ford Shelby GT500 Super Snake has become one of the most exciting and desired cars in the world since we introduced it in 2007," said Joe Conway, Co-CEO of Carroll Shelby International and CEO of Shelby American. "With production of the current generation GT500 ending, we wanted to commemorate the sunset of an important era. This Shelby truly changed the automotive landscape and inspired the performance competition that continues today. It's a car worthy of being honored with a very special limited edition Shelby. The package can only be ordered available for a limited time, so ownership puts a person in a very elite club."

The most important feature of the Signature Edition Ford Shelby GT500 Super Snake is the 3.6L Kenne Bell supercharger, which increases the output of the GT500 significantly, with the latest generation super-Stang packing an awesome 850 horsepower. Helping the Signature Edition Super Snake make this big power more safely is a unique Shelby cooling package that includes a bigger radiator, a unique heat exchanger and aluminum cooling tanks.

This power is put to the road by a set of forged 19 inch Weld Wheels wrapped in high performance tires and while the standard front brakes of the Shelby GT500 Mustang are left alone, the rear brakes of the Signature Edition Super Snake have been upgraded to provide better braking performance.

"Some of the most collectible cars built by Shelby American include the '427 Edition' Super Snake and '40th Anniversary' GT500 packages," said Neil Cummings, Co-CEO of Carroll Shelby International. "The Signature Edition GT500 Super Snake is the most exclusive version of the car we've ever offered."

Shelby Teaches You How to Drive the Super Snake
Those 50 people who hand Shelby American their 2007-2014 GT500 Mustang and a check for $44,995 while not only get the high performance Signature Edition GT500 Super Snake, but they will also get some instruction on how to drive the monster muscle car. Part of this limited edition package is a one day track experience and while details are limited, Shelby American is based at the Las Vegas Motor Speedway complex, so I would imagine that the track day takes place there as well.

In any case, this track day allows Shelby American to give owners the best chance to experience their 850hp GT500 Mustang in a safe environment and under the watch of a professional high performance driving instructor. This should help owners get the most out of their new Super Snake while also learning to handle the beast - making daily driving around town even safer.

Tesla Contemplates A New Strategy for China Retail even As Sales Boom
Jay Leno on Elon Musk & EVs: “I Think He Should Get ... Credit"
END_OF_DOCUMENT_TOKEN_TO_BE_REPLACED