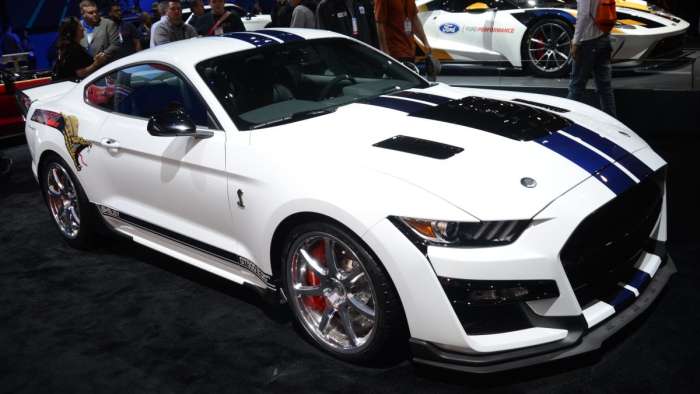 Ford built the new GT500 Mustang to be an all-around performer, but the concept car from Shelby American at the 2019 SEMA Show is all about straight line performance.
Advertisement

There were a great many Ford Mustang show cars on display at SEMA, so this concept car from Shelby American may have been overlooked by many people in the huge crowd. This car was in the main Ford display, but it was manned by a Shelby American representative rather than someone from Ford. Details are limited, as this car was shown more to gauge interest, but what we know is good enough to pique out interest.

Shelby American GT500 Dragon Snake
This is not a Shelby GT500 Concept from Ford Motor Company but rather, a concept built by Shelby American. While the Shelby name is best-known for the factory-produced packages such as the GT350, the GT350R and the GT500, the Shelby American brand still offers high performance upgrade packages for the modern Mustang at their headquarters near Las Vegas.

The 2020 Ford Mustang GT500 Dragon Snake Concept is Shelby American’s newest effort, and based on what we know so far, it could be a great package for sportsman drag racers. It is named after the specially built Shelby Cobras in the 1960s that were built for drag racing, which were also called Dragon Snakes.

“The 2020 Shelby GT500 is truly amazing in stock configuration, but we wanted to explore its pure acceleration capabilities,” said Vince LaViolette, Shelby American Vice President of Operations and Chief of R&D. “So we worked closely with Ford Performance and other partners to create the ultimate ‘weapon of track destruction’ in the quarter mile.”

GT500 Dragon Snake Exterior Upgrades
If you walked past the Shelby Dragon Snake Concept at SEMA, you might have mistaken it for a production GT500 Mustang with some simple upgrades. It has a large “drag wing” extending off of the rear end, unique “Dragon Snake” graphics on the quarter panels and custom wheels. It also has some extra vents added to the hood along with some package-specific badges here and there, but for the most part, the exterior is similar to the production GT500.

Upgrades You Can’t See
The Shelby American team began by adding some extra power, lifting the output to 800 horsepower. There are no specific details on how that number was achieved, but we know that it has high-flow catalytic convertors, so it likely features a custom engine tune. The dual clutch transmission has been retuned to work with the extra power and to yield the best short times, with help from the revised suspension setup. There are no details on what was changed with the suspension setup, but it is likely tuned to allow more front-to-rear weight transfer on a hard launch. 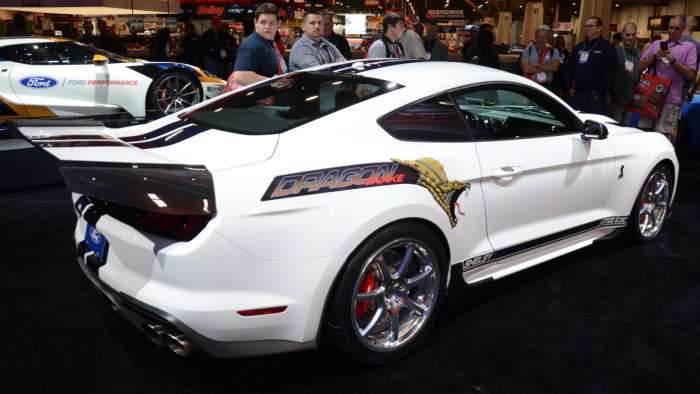 Finally, there is mention of weight reduction that includes, but may not be limited to, lightweight glasswork.

Considering that the stock 2020 Ford Mustang Shelby GT500 ran in the mid-10-second range in media testing, we would imagine that the Shelby American Dragon Snake could be into the 9s. The package adds power, reduces weight, improves weight transfer and incorporates stickier drag radial tires, so the Dragon Snake could be a 9-second car in the same form that we saw it in Vegas.

Right now, this is just a concept car, but with the GT500 proving to be a solid drag strip car in stock form, we would expect to see something like this package being offered by Shelby American in the near future.

LG's New EV Battery Plant Is a Welcome News for Tesla
Tesla Giga Berlin's New Hurdle: It's Not Only the Gov't, but Now Tesla Itself
END_OF_DOCUMENT_TOKEN_TO_BE_REPLACED