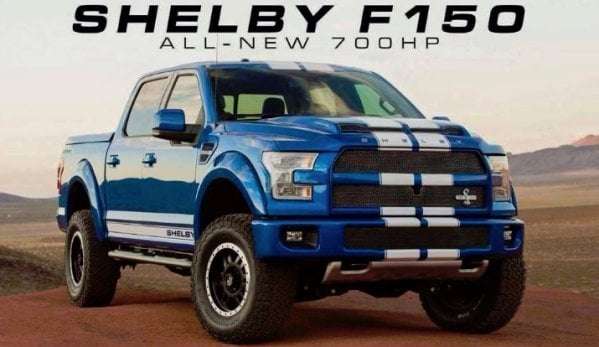 The folks at Shelby American have announced that they will roll out a heavily modified 2015 Ford F150 pickup at the upcoming SEMA Show in Las Vegas, with a 700hp engine and the proper mods to make one wicked off-road racer – serving as a stand-in for the SVT Raptor until that factory go-fast truck arrives next year.
Advertisement

While some people will never understand the need or desire to own a high performance pickup truck, the Ford SVT Raptor F150 and the Ford SVT Lightning F150 have proven very clearly over the past decade that there are plenty of prospective buyers around the US who want a truck that can do “truck stuff” and still go fast. The Lightning is gone and the Raptor has become the popular choice for F150 fans who want to go fast on road and off, but right now, there is no Raptor and there wont be until the 2017 model year.

Fortunately, the folks at Shelby American might have a package that will more than satisfy any new F150 owners’ need for speed – with their new Shelby F150 packing 700 horsepower and a long list of other modifications that will make this F150 more capable than any factory-built SVT truck ever.

The New Shelby F150
The image above is all that has been released on the 2015 Ford F150 turned Shelby F150, but this picture is certainly worth a thousand words when accompanied by the promise of 700 horsepower.

We don’t know which engine provides that power, but considering Shelby American’s experience with the 5.0L V8 in the Ford Mustang, I would guess that this high riding F150 is powered by that same engine. To reach 700hp, Shelby American likely added a supercharger and a collection of supporting modifications including a nice, loud exhaust system, but that is all just speculation. All that matters is that this F150 will pack at least 700 horsepower.

In addition to the powerful engine build, the Shelby F150 obviously has a massive suspension setup to make plenty of room for the beadlock rims wrapped in rugged, off-road ready tires. The Shelby F150 also has a unique hood, a unique grille with what looks to be a Shelby Super Snake logo, wheel flares at all four corners, Raptor-like vents on the front fenders, a front underbody shield, a tonneau cover and the Shelby-specific graphics package. The result is a truck that has far more ground clearance than any production F150, while the body modifications make for one mean looking performance truck.

There are no interior images available, but based on the other modern Shelby American post-title build packages, I would guess that this F150 has custom leather interior, Shelby floor mats and a serialized dash plaque.

Shelby F150 Debut
While we don’t have many details on this wicked looking Shelby F150, we do know that it will make its grand debut late next Wednesday at the 2015 SEMA Show in Las Vegas. As more information becomes available, you’ll find it here on TorqueNews.com!