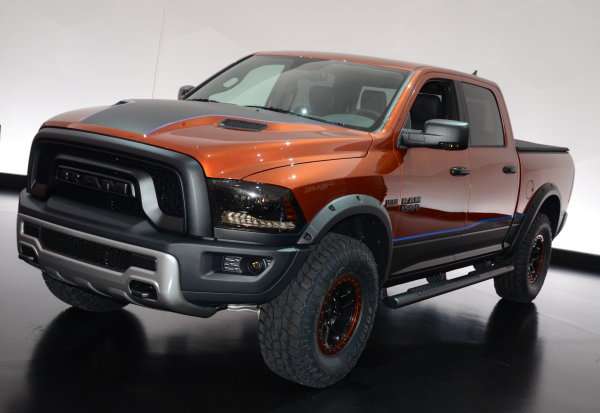 The Ram Rebel Gets Bigger and Badder at SEMA

The new Ram 1500 Rebel is the biggest and baddest factory half ton Dodge or Ram truck of the modern era, but at the 2015 SEMA Show, the Mopar crew has taken this rough and rugged factory package to an even more extreme level – with a fairly brief modification list.
Advertisement

While the AWD Dodge Challenger and the Dodge Dart GLH Concept have gotten the majority of the attention in the 2015 SEMA Show Mopar booth, the stunning Ram Rebel X takes a simple approach to making the already very rugged Ram Rebel even more aggressive.

The Ram Rebel X
The Ram 1500 Rebel package debuted this past January at the 2015 Detroit Auto Show and Rebel package introduced the world to the most off road ready, but for the 2015 SEMA Show, the Mopar crew wanted to make the Rebel a little more aggressive and a whole lot more eye-catching. They have done so by adding a collection of concept parts that may or may not arrive in the Mopar Performance Parts catalog in the near future, along with a set of bead lock 17 inch wheels wrapped in 35 inch Toyo tires.

Up front, the Ram Rebel X wears a two piece skid plate that protects the cooling system, the engine and the transmission, a set of smoked headlights, a Mopar power bulge hood and a unique stripe on that sporty hood. Along the sides, Mopar has added wider bolt-on style wheel opening flares which reach out over the beefy Toyo tires on the great-looking bead lock wheels. There are also black painted step bars, black badging and a thin blue line with the Mopar logo. Out back, the Rebel X wears a folding tonneau cover, smoked tail lights and more black badging – along with the unique Rebel X logo.

Finally, the air suspension system has been retuned to allow the Ram Rebel X to sit 1 inch higher than the normal Rebel’s highest off-road setting – providing an aftermarket stance without actually changing any of the components. There is no word on whether this suspension height tuning will be offered by Mopar at some point, but this concept is surely going to get some owners to see if they can extend the reach of their factory suspension bits.

The best part about the great looking Ram Rebel X is that it looks incredible with very few real changes. The skid plate, the smoked light lenses, the hood, the step bars and the tonneau cover are all very easy to do, as are the bead lock wheels and Toyo tires. Those components could all be offered in the Mopar catalog, but without more information on lifting the truck, Rebel owners will need to look to the aftermarket to get this stance in their own Rebel X.

With any luck, this simple package will become a production reality – even if only in limited production – as the Ram Rebel X is one wicked looking truck with almost all factory components.