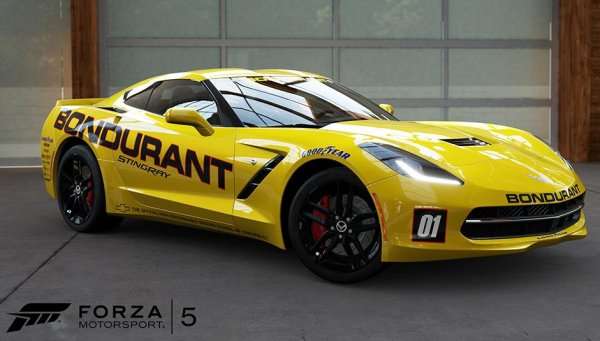 After facing more than a 6 months of criticism over excluding the Nürburgring and the new C7 Chevrolet Corvette Stingray, the makers of Forza Motorsport 5 have brought both the historic German road course and the new Corvette to game – with two new DLC packs which add The Ring, the C7 and an impressive group of other vehicles for June 2014.
Advertisement

First things first – the famed Nürburgring has finally come to Forza 5. When FM5 was introduced last November, there was an instant out roar by loyalists who insisted that the ultimate racing simulator absolutely must have the world’s most well known and most grueling race course. There are few tracks known around the world as well as “The Ring” and the 12.3 mile track has become the ultimate standard for high performance cars around the world. Seriously, how could Forza 5 not have it?

Well, the folks at Turn 10 have listened and available starting in June 2014, all Forza 5 players will be able to get the Nürburgring for free. This track is improved over the version featured on Forza 4 with stunning new detail and – more importantly – the addition of the Grand Prix circuit in addition to the Nordschleife on which many records are set. In total, the Nürburgring featured on FM5 offers more than 16 miles of track that is available both online and in career play. The Nürburgring is the third track added (all of which have been free) to Forza Motorsport 5, following Road America and the Long Beach Street Circuit.

I cannot wait to give it a try tonight in my 2008 Dodge Viper SRT10 ACR to see if I can equal the real world record of 7:12.13. (As this piece is published, the Nürburgring has not yet shown up on my end but it is supposed to arrive by the end of the day)

New Cars for the New Track
In addition to the free Nürburgring track added across the various modes of Forza 5, there is also a Nürburgring booster pack that adds five Ring-capable cars that span more than 80 years, including the 1939 Maserati 8C TF , the 1956 Lotus Eleven, the 1967 Brabham BT24, the 1989 Audi 90 IMSA-GTO and the new Formula Ford EcoBoost. While the track by itself is free, the extra cars will not be unless you are a Car Pass owner. I’ve not been able to find the price online and since I am a Car Pass owner, I will get this booster pack for free. I imagine that it won’t cost more than a 5 bucks to buy these five cars.

The C7 Corvette Cometh
Finally, after months of waiting and complaining, lovers of American performance cars will finally get to drive the new C7 Chevrolet Corvette Stingray. Due to the connections with the Grand Turismo game on rival Sony Playstation 4, the newest Corvette was not available before June – but it is now available as part of the Bondurant Car Pack. Joining the new Corvette are the 1980 Abarth Fiat 131, the 2009 Pontiac Solstice GXP, the 1970 Dodge Coronet Super Bee, the 2012 MINI John Cooper Works GP, the 2013 Mazda MX-5 Cup, the 1975 Fiat X1/9, the 2013 Bentley Continental GT Speed, the 1990 Alfa Romeo SZ Sprint Zagato and the 2013 Infiniti #77 Schmidt Peterson Motorsports Dallara IPS Indy Light race car.

This 10 car pack is available now (the new Corvette is quite impressive on FM5, by the way) and while it is free for Car Pass owners – it will cost you $9.99 if you haven’t purchased the Car Pass.
Check out the videos below with the first talking about the development of the Nurburgring for Forza 5 while the second takes a look at the new Bondurant Car Pack vehicles.