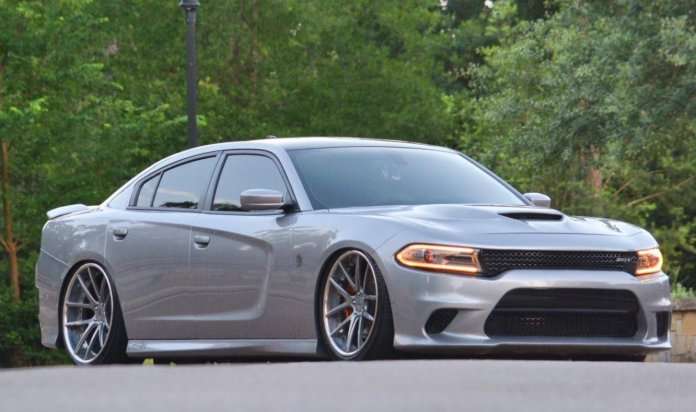 The November Hellcat of the Month as picked by the members of the SRT Hellcat and Demon Facebook Group is the 2015 Dodge Charger SRT Hellcat shown above, owned by Pedro Colon.
Advertisement

In the November Hellcat of the Month nominations, we focused on the Dodge Charger SRT Hellcat and of the five supercharged sedans chosen by the community – Pedro Colon’s car was the winner by a comfortable margin. Pedro’s slammed and supercharged SRT Charger grabbed a whopping 50% of the votes, with the second place car receiving 14%.

After the members picked Pedro’s Charger as their favorite for the month, we reached out to him for the story on his supercharged Dodge and below is his story.

Why the Hellcat Charger?
To be honest I've been a car enthusiast all of my life, but in 2005 when Dodge introduced the LX platform I became their biggest fan. The fact that they went against the grain and provided us with a powerful full size RWD platform made it clear to me that they were a brand that knew what Americans wanted. When the Hellcats were announced I was serving the last of my 22 years in the Army and I just HAD to have one. Due to that transition I couldn't afford one but I made it my goal to purchase one as a retirement gift to myself, the dream car that Dodge created for me. So a year later I was able to make that dream come true.

What Modifications Have You Made?
Immediately upon purchasing the car i took it over to my buddy at Hurst Collision. I had him completely paint correct the whole car while also colormatching the side markers, rear diffuser, the AFE intake, and the radiator cover. I also had all of the OEM black plastic grills and front fascia cover painted in gloss black. The Dodge letters were removed from the tail lights which were then also professionally painted with a tinted clear for subtle but noticeably darker look that doesn't reduce the visibility of the lights when they are on. I removed the fender badges and had them airbrush a very clean outlined rendering in their place.

Currently running a Magnaflow cat back exhaust system with an exhaust valve bypass kit by Swaim Custom Fabrication. Under the hood, every part available from Billet Technology has been installed in their Titanium finish with the designer cut. The beast breaths through an AFE Momentum CAI which I had smoothed and paint matched prior to installing. While I had the headlights open for the installation of the Diode Dynamics DRL kit and demon eyes, I had the bezels colormatched with the Dodge lettering hand painted on the drivers side, then the passenger side the Dodge letters were grinded off and the SRT Hellcat emblem painted in its place. A custom painted remote battery terminal cover by Modfather customs.The air suspension management system is Accuair's E-level with their latest Endo VT tank mounted to the Mopar rear Strut Tower Brace in the trunk. Powered by two 444C Viair compressors. All of the bags and bag mounts are the vehicle specific Universal Air Suspension (UAS) parts that mount to the OEM shocks and struts. This system not only provides all of the air ride perks, but also works seamlessly with the OEM adaptive suspension which remains FULLY functional. I had a 3D printed pocket made for the air ride control pad which i molded into the OEM shifter console and then wrapped in 3M brushed aluminum. While at SEMA picked up and just installed some awesome US Speedo gauges too! Wheels are by Nutek which are forged 3 piece untis in 22x9 fronts and 22x10.5 rears wrapped in Lexani LX Thirty series rubber. The calipers were powder coated in Prismatic Powders color Translucent Copper 2, by Clarity of Houston who also applied the custom graphic replacing the regular Brembo name with MOPWR paying homepage to our beloved Mopars!

Future Plans for the Car?
I plan on upgrading the air tank to the all inclusive Accuair CVT tank which provides an internal compressor and completely silent operation, a mild stereo upgrade, Xpel paint protection, and a Barton shifter but that's about it. I bought and built it to my liking which truthfully has satisfied me. Making it the first car that I have ever planned on keeping for the rest of my life.

I would like to thank my wife Maryann Colón for putting up with me and this passion and my super second family which is my car club Space City LX ( SCLX ) which I spend a crazy amount of time with.

So, from everyone at TorqueNews and the Hellcat & Demon Group Facebook page, congratulations to Pedro Colon and his Dodge Charger SRT Hellcat for being the Hellcat of the Month for November 2017.

If you own a Hellcat Challenger or Charger, or you are waiting on a new Dodge Demon or Jeep Trackhawwk, and you want to get involved, click here to join the Hellcat Group Facebook page!

John Goreham wrote on November 9, 2017 - 4:24pm Permalink
I'm not usually a fan of lowered cars, but that one looks fantastic.