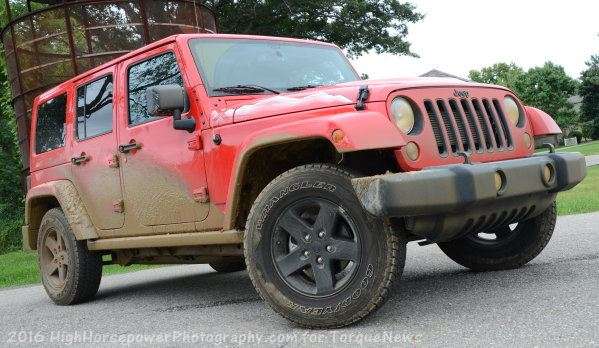 Next Jeep Wrangler Could Pack a 300hp Turbocharged 4-Cylinder

A new Jeep Wrangler is due within the next year or so and word on the street suggests that when it arrives, the new “original Jeep” could feature a turbocharged 4-cylinder engine with somewhere in the area of 300 horsepower – which could lead to a variety of improvements over the current Wrangler V6.
Advertisement

It has long been rumored that the next generation Jeep Wrangler will offer a new, fuel friendly 4-cylinder engine that is codenamed the Hurricane. According to the folks at Automotive News, this new Hurricane could pack “almost 300 horsepower” and if this proves to be true when the new Jeep arrives in dealerships, it could lead to a variety of improvements for the uber-popular Wrangler.

A 300hp Turbo 4 Wrangler
The information from Automotive News about a possible 300 horsepower Hurricane turbocharged 4-cylinder in the next generation Jeep Wrangler is unofficial, but it comes from a source familiar with the workings of the Wrangler project. In other words, it is a pretty solid source, as unofficial, unnamed sources go and the fact that Automotive News is running the piece is proof that there is credence to this information.

I expect that this information will prove to be accurate in the future and if it does, a new Jeep Wrangler with a turbocharged 4-cylinder packing 300 horsepower will play a big role in making the next gen Wrangler better than the current model.

Most notably, while the Hurricane engine is expected to offer similar horsepower to the Pentastar V6 in the current Wrangler, this new turbocharged 4-cylinder could offer a significant torque advantage over the current V6. The 2016 Wrangler comes with a standard 3.6L Pentastar V6 with 285 horsepower and 260lb-ft of torque. If the new Hurricane engine is to offer almost 300 horsepower, we could guess that it will offer slightly more horsepower than the current engine – perhaps something like 290-295. Hitting the 300hp mark would make for a great marketing tool, but for the sake of discussion, let’s say that the new engine offers 290hp. If you look at most of the turbocharged 4-cylinder engines sold in the US right now, including those used in the Fiat and Dodge lineups, these mills generally have more torque than horsepower.

Should that be the case with the new Hurricane turbo-4, we could see torque levels over 300, and that would make a massive difference compared to the 260lb-ft offered in the current Wrangler. That torque will make the new Jeep quicker and more capable, especially with the new 8-speed automatic transmission and what will likely be a lighter chassis architecture.

Next up, the new Hurricane turbocharged 4-cylinder engine will almost certainly weight less than the Pentastar V6, so the new engine should work with the new body and chassis to reduce the overall weight of the vehicle. This will improve performance in every way, while also improving the overall efficiency of the new Wrangler.

Finally, this new turbocharged 4-cylinder engine should be far more efficient than the Pentastar V6, especially when mated to the 8-speed automatic and fitted into the new, presumably lighter next gen Wrangler. The current Wrangler is great in a variety of ways, but fuel economy really isn’t one of them. This is almost certainly a concern of the team designing the new Jeep, and whether or not the new engine has around 300 horsepower, adding a turbocharged 4-cylinder engine to the Wrangler lineup should have a huge, positive impact on the fuel economy of the original Jeep.

Will the V6 Survive?
The biggest question surrounding the next generation Jeep Wrangler is whether or not the company will continue offering the Pentastar V6 if this information on the Hurricane proves to be accurate. If the turbocharged 4-cylinder has slightly more horsepower, more torque and is far more efficient, it is hard to imagine why the company would bother offering the V6, except as a lower price option early in the next generation of the Wrangler.

The new Jeep Wrangler is expected to arrive sometime in the next year and when it does, we can expect the already lofty sales of the original Jeep to climb to new record levels.