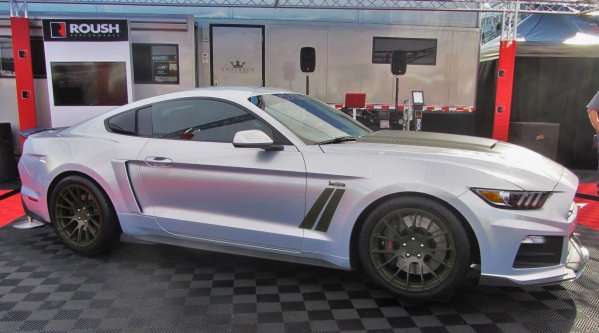 The folks at Roush Performance used the 2016 SEMA Show to introduce their new P-51 Mustang – a 727hp package designed to sit atop the Roush Mustang lineup in terms of power and performance.
Advertisement

Back in 2008, Roush Performance introduced their Ford Mustang P-51 package with 510 horsepower, which at the time, made it one of the most powerful muscle cars on the street. The muscle car segment has changed a great deal since then, but with the introduction of the new Roush P-51 Mustang at the 2016 SEMA Show, the well-known tuning company has once again rolled out a package that will overpower the vast majority of cars on the road – including many supercars.

On the outside, the Roush P-51 Ford Mustang has been upgraded over the standard Mustang GT in pretty much every area, with a unique front fascia, splitter, hood with heat extractors, side sills, body side scoops, quarter window scoops, rear diffuser, taillight blackout panel and package-specific badging all around with a red and yellow theme, paying tribute to the 357th Airborne from WWII.

On the inside, the Roush P-51 Mustang sports brown leather seats and door inserts, P-51 logos on the gauges, a red Roush shift knob, Roush pedals and a unique plaque denoting the significance of this limited edition muscle car.

Finally – and perhaps most significantly – the Roush P-51 Mustang package adds the 5.0L Ford Racing Aluminator V8, topped by a Roush Stage 2 supercharger system which helps lift the output from 435 horsepower to 727 horsepower. Allowing that high performance crate engine to announce its presence is the Roush active exhaust system, which offers three different sound levels and a unique driver-selectable mode.

This Roush P-51 Mustang is strictly a concept car built for the SEMA Show, but there is word that Roush will offer a limited number of this package in the near future. It will be interested to see if the production version of the Roush P-51 will actually come with the Ford Racing Aluminator or if they will stick with the standard 5.0L V8 from the production Mustang GT, but in either case, Roush will soon be offering a Ford Mustang package that will hang with the best on the street.