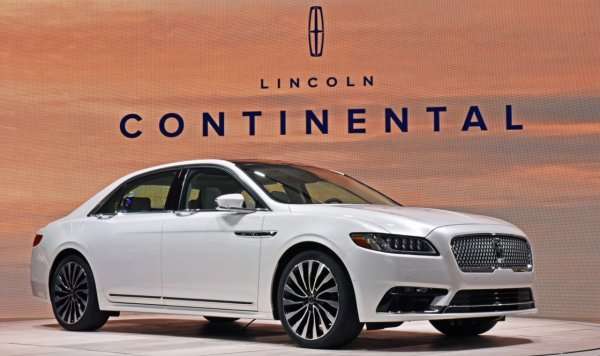 The new Lincoln Continental made its production earlier this week at the 2016 Detroit Auto Show and with that debut comes more of the vital information including features, the engine lineup and the fact that this large luxury sedan has stuck with the front-wheel drive configuration that most luxury automakers have left behind.
Advertisement

While a great many journalists jump on the chance to bag on the Lincoln brand, I like both the brand’s current styling and the direction in which they are headed. Sure, Lincoln doesn’t compete with Cadillac in terms of sales figures, but from the MKC to the MKZ, I like Lincoln.

Based on the car on display at the ongoing 2016 Detroit Auto Show, that question is a resounding “yes”. The Lincoln Continental production car is every bit as gorgeous and high tech as the concept, with an engine lineup topped by a Lincoln-exclusive 3.0L twin turbo V6 with 400 horsepower and 400lb-ft of torque. This car checks all of the boxes in terms of the luxury level requirements and it does so in grand fashion, but I remain shocked that Ford Motor Company opted to build their flagship luxury car a front wheel drive chassis.

Lincoln Bucks the Rear Drive Trend
Now, I understand that since the early 1990s, the Lincoln Continental has been a front wheel drive luxury sedan, but Ford went the FWD route back then because the vast majority of competitors were also going that route. For much of the past two decades, it was tough to find an American or Japanese that wasn’t front wheel drive, but over the past 20 years, Lexus and Cadillac (among others) have shifted most of their lineup to rear wheel drive platforms. Luxury cars no longer focus just on comfort, as the people paying big money for high end cars want a better balance of comfort and driving dynamics, and that balance is more easily achieved with rear-drive architecture.

The new Lincoln Continental will battle the likes of the Cadillac CT6, the Lexus LS lineup, the BMW 7-Series and the Mercedes Benz S-Class – all of which are rear wheel drive. Like many of those vehicles, the new Continental features optional all-wheel drive (standard with the 400hp engine), but the fact that it is one of the few big, beautiful front wheel drive luxury sedans sold in America will put it in a class of its own.

Continental Drivetrain Options
So, the Lincoln Continental is a front wheel drive luxury sedan with optional all-wheel drive, it comes with three different engine options and a 6-speed automatic transmission is standard across the lineup.

The premium engine – which comes only with torque vectoring AWD – is the new 3.0L, twin turbo V6 that delivers 400 horsepower and 400lb-ft of torque, but unlike the Ford twin turbo engines, Lincoln is not using the EcoBoost name.

The base model engine is a naturally aspirated 3.7L V6 and those who want just a touch of twin turbo power can opt for the excellent 2.7L V6 that is at use in a variety of Motor Company vehicles. Unfortunately, official specs for those two engines haven’t been announced, but I can make some guesses based on the output of these engines in current Lincoln products. I would expect the 2.7L twin turbo V6 to produce somewhere in the area of 315 horsepower and 340lb-ft of torque while the entry level 3.7L V6 should make around 300 horsepower and 280lb-ft of torque. The 2.7L mill will also offer better fuel economy figures than the 3.7L base engine and I wouldn’t be surprised if the 2.7L was the most efficient engine in the lineup – especially with the new 3.0L V6 being offered strictly with all-wheel drive.

The Pinnacle of Interior Luxury
The Lincoln Continental was designed to be Ford Motor Company’s flagship luxury car and in designing the interior, the team cut no corners. In addition to all of the handsome high end surfaces and a premium infotainment package linked to a Revel audio system, the Continental has front and rear seats that will compete with the most comfortable interiors in the world.

Up front, the Continental features Lincoln’s new Perfect Position Seats, lined in plush padding and wrapped in premium leather. These front seats offer 30 different adjustable components including individual height settings for your left and right leg, so there is a good chance that these seats will comfortably accommodate anyone. Needless to say, they are both heated and cooled, and after a long day at work – they will even massage your back.

So, while I don’t love the fact that the new Lincoln Continental is built around a front wheel drive design, I love every other aspect of the car. The exterior design is a gorgeous application of the new brand design language and the interior is seriously world class luxury level. Add in the 400 horsepower twin turbo engine and you have a new Lincoln that could very well rival the best big luxury sedans sold in the US market.

Pricing has not been announced, but with the new Lincoln Continental going on sale later this year - we should get all of the details very soon.

Bret A. wrote on January 14, 2016 - 10:31pm Permalink
Enjoyed your piece, but in 2016, we need to put this whole notion of FWD vs RWD to bed. Every luxury automaker, even the Euro brands like BMW and MB, all offer FWD models. The public doesn't care. BMW polled 1-series owners and 80% thought their vehicles were FWD even though they were RWD. Time to stop slamming Lincoln (and Acura, and Volvo, etc) for FWD platforms because everyone is there now...
John Goreham wrote on January 15, 2016 - 9:39am Permalink
Patrick, your title answered the only question I had about the new Lincoln. Bret's point has validity, but not a single luxury automaker with solid car sales has a FWD car as its top model. Lexus is number one in sales and its LS is a RWD platform. Mercedes is number two, S-type is RWD. All of BMW's top models are RWD as it its 7-Series. Whether the buyers know it or not, the way a car feels has a lot to do with its layout. A front-drive 3-Series would not be the same car. Only Lexus has a successful, high-volume premium FWD car for sale. Acura did, and may again, but both it and Audi's CAR sales have dropped like a stone in terms of market share. Now with crossovers, the exact opposite is true. FWD platforms with AWD rule. As they should. Just my $0.02. I saw the Continental yesterday in person. Gorgeous. I hope it sells beyond all expectations.