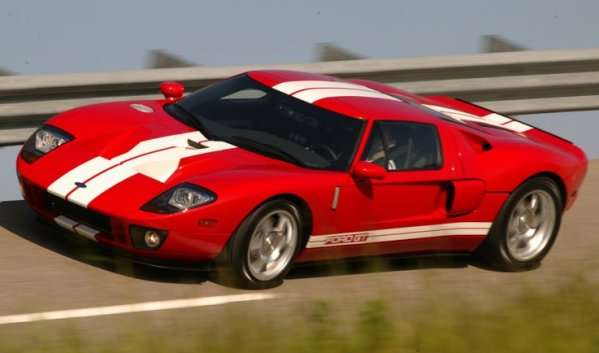 New Ford Supercar to Debut in Detroit, Possibly with the GT350 Mustang Engine

Word around the automotive watercooler suggests that the next generation of the fabled Ford GT supercar will debut next month at the 2015 Detroit Auto Show and if I had to guess, I would expect that the new LeMans-bound performance car will be powered by the same flat plane V8 engine as the new Shelby GT350 Mustang.
Advertisement

I should start by pointing out the fact that Ford Motor Company has confirmed an impressive collection of high performance cars that will be on display in Detroit next January, including the Shelby GT350 Mustang, the first ever US-bound Focus RS and the next generation SVT Raptor F150. Ford has not actually confirmed that their next supercar – which may or may not be called the Ford GT – will debut in Detroit. However, it has been announced that Ganassi Racing will be participating in the world of endurance racing with a new Ford supercar and according to Autoweek, that racing program will be preceded by a new road car debut at the upcoming 2015 North American International Auto Show in Detroit.

The Next Ford GT
There have been rumors for some time now that Ford Motor Company was planning to introduce a new supercar which would be the evolutionary successor to the 2005-2006 Ford GT supercar. There has been no confirmation that it will actually be called the GT, but the plans for Ganassi Racing seem to confirm that something like the GT is on the way.

Since there is no official word on the existence of this program, there is no real information, but I believe very strongly that Ford will use the same flat plane 5.2L V8 that debuted under the hood of the new Shelby GT350 Mustang. Remember those teaser videos that led up to the introduction of the GT350? Lots of clips of vintage Mustang race cars, Ford Focus RS-based race cars, a whole lot of vintage LeMans racing action with the GT40 and even some modern endurance racing featuring the Ford EcoBoost Prototype racer that Ganassi campaigned for the 2014 racing season. This led some people to believe that the car that we were all waiting to see was not the GT350 Mustang, but a new version of the GT supercar. It was the Mustang, of course, but the introduction of that new flat plane V8 got me thinking.

The Flat Plane Mustang V8 in a New Supercar
Due to the somewhat rough nature of a flat plane, high performance V8, they are typically reserved for race cars so it comes as no surprise that in introducing the track-ready Shelby GT350 Mustang, an engine that is better equipped for track use was created. The “problem” is that developing an all-new road engine like this, which uses technology that hasn’t been used on an American road car in the past, was almost certainly very, very expensive. The GT350 will be pricey, but it will still be a low volume vehicle and that will make it hard for Ford to cover the development costs of the new flat plane V8. In most other situations, the high costs of developing a street-use engine is offset by using that same engine across a collection of models, but where else is Ford really going to use an engine like the Shelby flat plane V8?

In a supercar – that’s where.

Should Ford use the 5.2L flat plane V8 from the new Shelby GT350 Mustang (or even a closely related variant of that engine), it will allow the Motor Company to further cover the R&D costs that came with this new engine. Using this 5.2L FPV8 in a new Ford GT which will likely have a hefty price tag will not only allow Ford to absorb some of the engine development costs, but it will almost help keep the final cost to the customers down on the new Mustang.

Unfortunately, with the Detroit Auto Show a few weeks away, it will be a little while before we know anything about the future of the Ford supercar lineup – but it looks very likely that the Chevrolet Corvette and the Dodge Viper will soon have some competition from the Blue Oval.

Parks McCants wrote on December 24, 2014 - 12:31pm Permalink
For us that aren't familiar with flat- plane crankshaft configurations:http://www.projectm71.com/Cross_FlatPlane.htm Thanks Patrick.
Don wrote on December 24, 2014 - 5:20pm Permalink
Should it be slated for competition in 2016 that would mark another 50-year milestone; Ford's first Le Mans victory in 1966 with the GT.