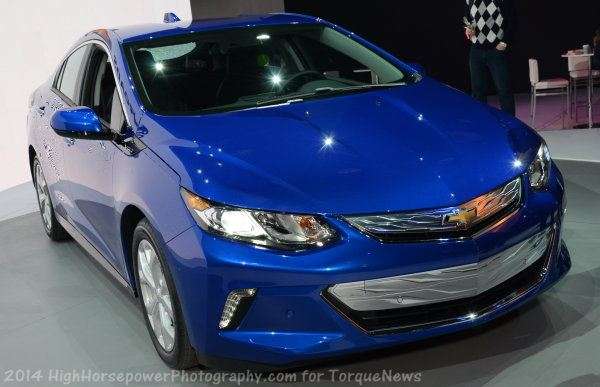 The 2016 Chevrolet Volt was among the new models to debut this week at the 2015 North American International Auto Show, with the next generation of the electric Chevy bringing a new look, better battery range and improved fuel economy when running strictly on the gasoline engine.
Advertisement

The Chevrolet Volt hit the market back in 2010 and while it sold well during the first few years, sales numbers have slowly declined as fuel prices have dropped and the number of EV competitors in the US has grown. General Motors wanted to design a new Volt that would cater to their ideal customers’ needs, so they tapped current Volt owners for insight on how to make the next generation car even better.

The result is a 2016 Chevy Volt that has a sharpened new look, a bigger battery and a more fuel efficient engine – all of which combine to make a great car even better.

2016 Volt by the Numbers
First off, let’s talk about the most important aspects of the 2016 Chevrolet Volt which are, of course, the moving parts that make this extended range electric vehicle so strong. The new components for the 2016 Volt include an 18.4 kWh battery, a new 1.5L range extending engine and a new dual motor electric drive unit that is both more efficient and lighter than the previous drive setup. The result of these changes are a range of 50 miles on pure electric power, a gasoline engine only fuel economy figure of 41 miles per gallon, a total range (one full battery charge and one full tank of gas) of 420 miles and an electric MPG equivalent of 102MPGe.

For comparison, the Chevy Volt that is in dealerships right now has a 17.1 kWh battery that will only allow you to go 41 miles on all electric power and a 1.4L gasoline engine that only affords you 37 miles per gallon – although my time testing the Volt turned up better numbers in both of those categories. Also, the MPGe number of the new Volt is significantly better than the 98 MPGe figure for the outgoing models so in all of the areas where EV owners put the most concern – the Volt has improved by a fair margin.

Finally, in addition to being better in every measurable metric, the 2016 Chevrolet Volt will be quieter when being driven and it will be quicker from a stop to both 30 and 60 miles per hour. Oh, you can now run 87 octane on the rare occasion that you need to fill the tank, allowing owners to save a few bucks at the tank whereas owners of current models have to run premium fuel.

The Look of the New Volt
One of the advantages of the current (1st generation) Chevy Volt is that it didn’t have the awkward “aero over everything” shape that we see from some other EVs sold in America (like the Nissan Leaf). The 2016 Volt has improved aerodynamic properties, but the GM team was able to improve the flow of air around the outside of the car while avoiding the “EV shape”. In fact, the face of the 2016 Volt is an improvement over the current models in my opinion, as even with the heavily filled in grille openings, the Volt doesn’t look all that different from any other small sedan sold in America.

The 2016 Volt is still aerodynamic, but the new angular headlights, the sporty looking grille openings and the new sculpting lines bring new life to the popular American EV. The side view hasn’t changed all that much, but the back end has been totally revised, with LED taillights that are tucked to the edges of the rear end rather than extending out across the face of the decklid. Also, while the 2016 Volt still has a hatchback design, the entire rear end has a far more conventional feel with less exaggerated lines on the corners of the car.

Overall, the changes aren’t earth shattering, but they are more than enough to give the 2016 Volt a sharp new look from front to back. When you combine this new appearance with improved range figures across the board, we are likely to see sales of the Volt jump up a bit when this new model reaches dealerships later this year. In the meantime, click any of the thumbnails above for a closer look at the new Volt, inside and out!