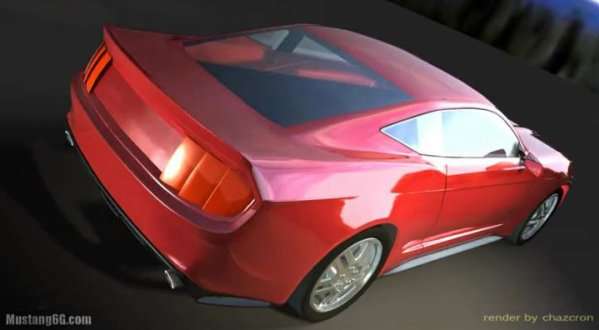 While we have seen plenty of artists renderings of the 2015 Ford Mustang, automotive artist Charles Cronley has worked up the first 3D videos of the S550 Mustang with the help of advanced computer generated imagery (CGI) - showing us the next generation pony car from all angles.
Advertisement

Before we get into our discussion of the 2015 Ford Mustang videos below, some quick credentials on Charles Cronley, the artist responsible for this work of art. Chazcron, as he is better known in the online Mustang community, was also active in attempting to predict what the S197 Mustang would look like when it debuted for the 2005 model year. Using spyshots and CAD files of the S197 Mustang, Cronley was able to put together a 3D CGI piece on the 2005 Mustang that very accurately depicted that new Mustang.

Thanks to a long trail of spyshots and spy videos of the 2015 Ford Mustang, Charles Cronley has put together a couple new 3D CGI videos showing the upcoming pony car – or at least what he believes that it will look like when it debuts. Cronley has also spoken to unnamed sources who have seen the 2015 Mustang in person and he has incorporated their input into this video rendering as well.

The most significant aspects of the 2015 Ford Mustang videos below are the sides and rear of the new pony car. We have seen enough spyshots of the front end to have a very good idea of what the S550 Mustang will look like when it drops next year but there have been few looks at the sides or rear end of the next generation Mustang. According to Chazcron, the taillights will have a very similar design to the current models (sticking to that retro three-block light design) with a trunklid that extends out to create a natural spoiler shape. There is also a blacked out lower rear fascia that has what looks to be a mild diffuser design that wraps around the dual exhaust. I like it a lot…and I think that it would work nicely for the 2015 Mustang.

Along the sides, Cronley’s CGi videos show a very smooth-sided 2015 Ford Mustang, devoid of any vents but featuring a very hard high body line that runs practically from the big, elongated headlights to the taillights out back. These videos also show that the 2015 Mustang (in Cronley’s mind) will have a very long rear window that provides the fastback look without the back glass actually traveling clear to the rear end of the vehicle. This long rear roofline also has a very sexy looking C-pillar with a sharp rear quarter window that gives this Mustang a very sleek, aggressive looking profile.

Now, I should remind everyone reading this that the 2015 Ford Mustang shown in the videos below are from the mind of an artist who has no ties to Ford Motor Company and in the end – these video renderings may not resemble the S550 Mustang in any way. However, we know that Charles Cronley’s work has been very accurate in the past so there is a good chance that the videos below give us all our first look at the next generation Mustang from all sides.