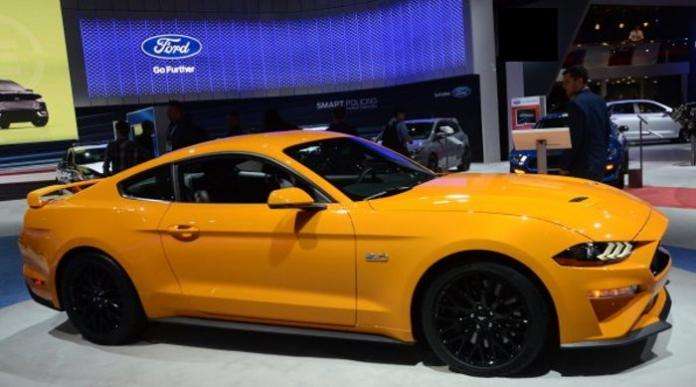 After watching the Chevrolet Camaro take its first monthly sales title of 2017 in April, the Ford Mustang charged back for May, beating both the Camaro and the Dodge Challenger in the 5th month of the year along with pulling out to a bigger lead in the annual sales race.
Advertisement

The Chevrolet Camaro did something in April that it hadn’t done since October 2016 – it beat the Ford Mustang and Dodge Challenger in monthly sales. April was the best month to date for the new 6th generation Camaro and with 8,737 units sold, we had to wonder if the new Chevy muscle car wasn’t about to make a big sales charge as we head into the summer months.

Based on the recently released May sales numbers, the answer to that is “no”, as the Camaro stumbled a bit in May 2017, allowing the Ford Mustang to claim the monthly title for the 4th time in 5 months.

Mustang isn’t Great in May
The Ford Mustang led the muscle car segment in sales for May 2017, but the original pony car didn’t have a great month. Mustang sales were down 23.5% from the same month last year while also being down around 170 units from the previous month. In fact, May was the second worst month of the year for Mustang sales, but Ford still sold enough to win the monthly segment sales race with 7,895 units sold.

Camaro is Strong, but not Strong Enough
The Chevrolet Camaro was actually up in terms of the year over year comparison, with the 7,841 units sold in May 2017 comfortably besting the 5,827 units sold in May 2016. However, the drop of roughly 900 units from the month before caused the Camaro to drop below the Mustang once again. May was the second best month of 2017 for the Camaro, but the decline from the month before isn’t a great sign.

Challenger Comes Very Close
The Dodge Challenger moved 6,989 units in May, which is the best month for the brawny Mopar muscle car in 2017 and the best month since May of 2015, when the company sold 7,438 Challengers. That makes May 2017 the second best month in terms of sales in the history of the modern Challenger, so while Dodge might not come close to beating the two cross-town rivals in sales volume, the Mopar machine continues to see sales numbers grow even as the rumored end of the generation draws near.

Mustang Leads Big on the Year
During the first 5 months of 2017, Ford has sold 38,422 examples of the Mustang. Chevrolet has sold just 31,876 Camaros, so the Mustang has a lead of nearly 7,000 units. Chevrolet isn’t going to make up numbers like that in one month or even two, so for the Camaro to have a real shot at taking the 2017 muscle car sales title – Chevrolet is going to need to put together a string of strong months.

The Dodge Challenger continues along with its strong year, with 29,305 being slightly higher than where the car was at this point last year.

LG's New EV Battery Plant Is a Welcome News for Tesla
Tesla Giga Berlin's New Hurdle: It's Not Only the Gov't, but Now Tesla Itself
END_OF_DOCUMENT_TOKEN_TO_BE_REPLACED