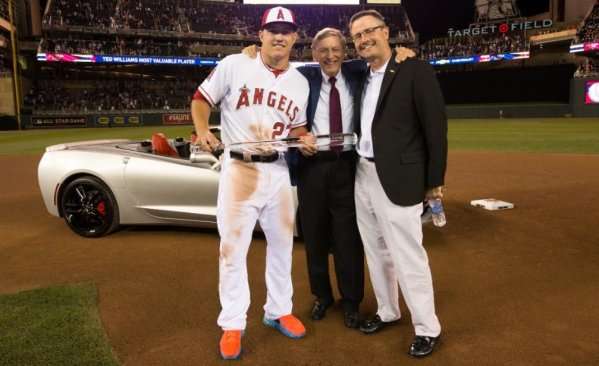 After being named the Most Valuable Player for the 2014 Major League Baseball All Star Game, Angels’ slugger Mike Trout took home a brand new Chevrolet Corvette Stingray Convertible – picking the sleek sports car over a brand new Chevrolet Silverado pickup while also signing the hood of a second Corvette to be auctioned off.
Advertisement

General Motors sponsored the Most Valuable Player award at the 2014 Major League Baseball game in Minneapolis Minnesota, giving the winner the option of a Chevrolet Corvette Stingray Convertible or a Chevrolet Silverado 1500. Mike Trout, Outfielder for the Los Angeles Angels, was named the MVP for the big game after leading his team to a big win, securing home field advantage in the world series for the American League representative. After doing so, Trout had his choice of the full sized Chevy truck or the C7 Stingray and – not surprisingly – the 22 year old baller went with the sexy sports car.

“Tonight, we honor the achievements of Mike Trout, the 2014 All-Star Game Most Valuable Player, while we showcase our own MVPs, the Corvette Stingray and Chevrolet Silverado,” said Paul Edwards, U.S. vice president, Chevrolet Marketing. “We hope many of our fellow baseball fans join us to help raise funds for a worthy cause.”

Mike Trout’s MVP Performance and an AL Win
Mike Trout was the starting left fielder for the American League in this week’s MLB All Star Game and the young gun made three plate appearances while in the game. Trout went 2 for 3 with a double and a triple, driving in two runs and scoring one of his own. The American League went on to win the by a score of 5 to 2 and in doing so, the American League team that plays in the World Series will have home field advantage regardless of their overall records.

General Motors didn’t go into much detail about Mike Trout’s new Chevrolet Corvette Stingray convertible, but I would expect that it is fitted with the features of the 3LT package – but it doesn’t appear to have the features of the Z51 Performance Package.

A Second Corvette Stingray Signed and Auctioned for Charity
General Motors actually contributed two new Chevrolet Corvette Stingray models for the 2014 MLB All Star Game and in addition to the one given to Mike Trout, a second Stingray in Fastback form is being auctioned off for charities including the United Way, MLB Charities and the MLB Players Trust. This second car comes with two hoods, one for road use and another that has been signed by every player and coach of the National League and American League all star teams. This Corvette does come with some details, including the sought after Z51 package and with the auction is taking place online right now - the current winning bid sits at $80,500.

Click here to visit the charity auction page and to take your shot at winning this autographed Chevrolet Corvette Stingray.

Those who cannot afford to buy a Corvette, but who also want to get in on the donating/bidding action can take a shot at winning a C7 Corvette Stingray hood, which has also been signed by all of the ball players and coaches involved with this year’s MLB All Star Game. Right now, the bidding for that hood sits at $6,750 and you can check out the bidding (or make a bid of your own) by clicking here.