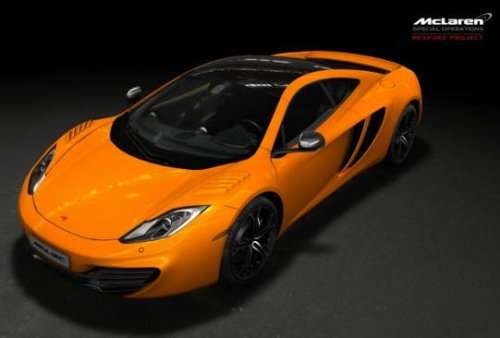 McLaren Chicago has commissioned the production of these six limited edition 2012 MP4-12C Coupes after demand from their customers and the McLaren Special Operations division was responsible for the build. The six cars will be offered in three colors – white, silver and McLaren Orange (shown on the right) – with two examples of each color available.

The modifications to the 2012 McLaren MP4-12C Project Alpha begin under the hood – or rear engine cover, as the case may be with the 12C Coupe. The twin turbocharged 3.8L V6 packs 616 horsepower (the same as the upcoming 2013 models) which presents an improvement of 24 horsepower over other 2012 MP4-12C models thanks to a new engine calibration. In addition to the added power compared to standard 2012 model year 12C Coupes, the Project Alpha model is equipped with a new transmission programming and a new exhaust system that allows the driver to adjust the level of sound entering the cabin.

On the outside, the 2012 McLaren MP4-12C Project Alpha is set apart from other 2012 models with a gloss black finish on the roof surface, the front splitter, the rear deck lid/engine cover, the rear splitter and the inner pockets of the lightweight wheels along with carbon fiber rear vents and front fender louvers. These additions look awesome, enhancing the aggressive look of the supercar and giving it a look similar to the race ready GT3 versions with the exception of the massive rear spoiler and the wide body package. Inside, the MP4-12C Project Alpha sports special badging to show that it is a special edition version of the sexy supercar including the build number out of 6 along with being packed full of every high end option available in the standard 12C Coupe for 2012.

The 2012 McLaren MP4-12C Project Alpha carries a hefty price of $335,000 which is a pretty substantial upcharge over the $229,000 base price of the MP4-12C Coupe but when you consider the fact that these McLaren supercars are fully loaded, equipped with the performance features of the 2013 model year 12C and the super exclusive – this is a very special car with a price to match. Luckily, even at $335,000, the MP4-12C Project Alpha is a smoking hot deal in the supercar world which is reflected by the fact that 4 of the 6 Project Alpha models being built are already reserved. With only two of these limited edition McLaren supercars left, if you have $335 large sitting around you had better contact McLaren Chicago in a hurry. Click here to visit the McLaren Chicago website for more information!

This second bespoke project is proof (following the unique one-off X-1 Concept) that McLaren is becoming a supercar builder that can compete with the best that Italy has to offer with an ultra high performance supercar that packs comparable performance in addition to customization opportunities to rival supercars from Ferrari or Lamborghini.