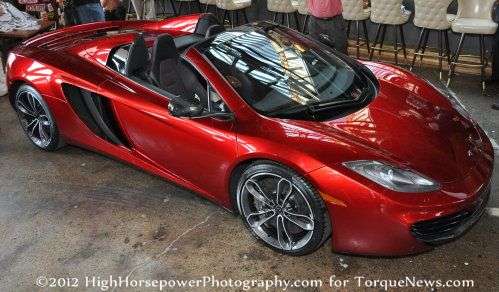 While the new McLaren 12C Spider was busy making its big debut at the Pebble Beach Concours d’Elegance during the Woodward Dream Cruise, today the folks from McLaren brought their incredible new drop-top supercar to the Vinsetta Garage on Woodward Ave – offering the Detroit media their first chance to check out the new convertible in a private setting.
Advertisement

Just like the McLaren MP4 12C coupe, the McLaren 12C Spider is powered by a twin turbocharged 3.8L V8 packing 616 horsepower at 7,500rpm and 443lb-ft of torque which is available from 3,000 to 7,000rpm. That power is shuttled to the rear wheels via a 7-speed dual clutch transmission that is shifted by means of the paddle shifters on the steering wheel. Thanks to the lightweight carbon fiber MonoCell chassis design that utilizes front and rear aluminum frame sections, the 12C Spider carries a dry weight of just 3,033 pounds which is only about 100 pounds heavier than the hard topped MP4 12C Coupe. This lightweight body allows the 12C Spider to dash from 0 to 62 miles per hour in just 3.1 seconds, 0-100mph in 6.1 second and 0-124mph in 9.0 seconds – while hammering down the quarter mile in just 10.8 seconds with a trap speed of 134 miles per hour. The 12C Spider is also able to reach a top speed of 204 miles per hour.

The MP4 12C and the new McLaren 12C Spider are so similar in every way (shy of the removable top) that the Spider offers very little compromise compared to the hard top models. The 12C Spider is just as quick to 62mph, just one tenth of a second slow to 100mph, just two tenths slower to 124mph and just 2 tenths slower in the standing quarter mile. Also, the hard top MP4 12C coupe is able to reach a top speed of 207 miles per hour but we are guessing that the 204 limit of the 12C Spider feels just as exhilarating as 207 to those who want their supercar goodness to come with an open air option.

When the retractable hard top is in the upward and locked position, the 2013 McLaren 12C Spider looks almost identical to the coupe but with the push of a button, the side and rear windows roll down and the rear tonneau cover begins to lift to make room for the folding hard top. From the time you first push the button to drop the top, it takes just 17 seconds for the entire process to be complete with the top safely stowed and for those 12C Spider owners who are in too much of a hurry to stop and put the top down, the car can be moving at speeds up to 20 miles per hour and still drop the top.

The body and chassis of the new McLaren 12C Spider are largely comprised of carbon fiber and the interior joins the glossy carbon fiber fun; with exposed carbon fiber appearing on the steering wheel, the center console (that rises up into the center stack) and in the construction of the thin race-inspired seats. The doors swing upward when opened with the window controls and the dual zone climate controls for both the driver and the passenger located in the door-mounted control panel.

The 38 McLaren dealerships located in 22 countries around the glove have already begun ordering their first 2013 McLaren 12C Spider and the company expects to have models in the dealerships (and in the hands of happy new owners) early in 2013. Orders are currently being accepted and those who wants to park one of these sexy supercars in their garage, you will be met with an MSRP starting at $265,750 but it should be noted that the MSRP does not include the $2,500 destination fee nor does it include any applicable tax or title fees.

I could talk all day about how awesome the 2013 McLaren 12C Spider is in the flesh but a picture is worth a thousand words and at this point, the pictures can tell a more exciting story than can I. The gallery above on the right has a few images from various angles but the TorqueNews.com Facebook page has over 80 more high resolution pictures of the new topless McLaren supercar in a variety of stages – including with the top up and down along with the doors open and closed.

Click here to check out our high res McLaren 12C Spider gallery and while you are there, make sure to “Like” the TorqueNews FB page for all of your latest automotive news!