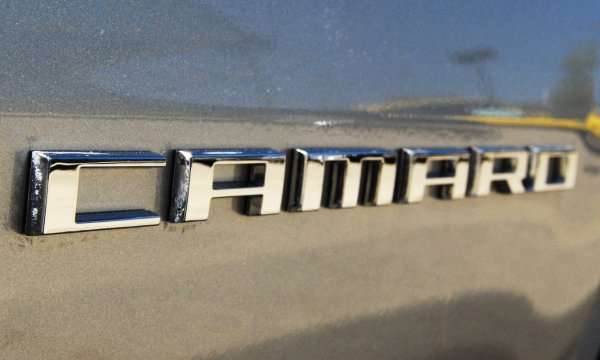 While covering the rumors that the 2016 Chevrolet Camaro could pack a turbocharged 4-cylinder engine, we have received quite a bit of feedback from readers who don’t see the need so I wanted to take a quick look at why General Motors “needs” to offer a 4-cylinder engine – at least in European markets.
Advertisement

The rumors surrounding the likelihood of a 2016 Chevrolet Camaro 4-cylinder model have gone back and forth. At first, rumors suggested that there would be a turbocharged 4-cylinder engine option for the 6th generation Camaro, but those were dashed late last year when Camaro boss Al Oppenheiser made a comment about wanting bigger engines and more power from the Chevy muscle car. Fast forward to earlier this month and we have a new report from overseas stating that there will indeed be a turbocharged 4-cylinder 2016 Camaro and we are back into the thick of the discussion.

Throughout the entire discussion of a 4-cylinder 2016 Chevrolet Camaro over the past year, plenty of Camaro fans and Camaro critics have doubted the need for a 4-cylinder 6th gen model. While some don’t see a point and others find it to be nothing shy of blasphemy for any muscle car to have a 4-cylinder engine, there are a few reasons why General Motors will very likely roll out a turbo 4…even if only for non-North American markets.

Ford Has a Turbo 4 So GM Needs One Too
The first reason that I expect to see a turbocharged 4-cylinder engine option in the 2016 Chevrolet Camaro is that the 2015 Ford Mustang EcoBoost. The ongoing battle between General Motors and Ford Motor Company is all about one-upping the other. The 2015 Mustang will come with the powerful and efficient 2.3L EcoBoost 4-cylinder and if General Motors rolls out the 2016 Camaro with only a base V6 and the LT1 V8 – they will effectively be allowing Ford to dominate the 4-cylinder muscle car segment. It sounds silly that there IS a 4-cylinder muscle car segment, but there is…and Ford expects to sell a ton of the EcoBoost powered 2015 Mustang.

I don’t believe that General Motors will just concede to Ford Motor Company – even in a battle as miniscule as the 4-cylinder muscle car segment. This is especially true in the European market where a turbo 4 is far better received by consumers than a V6.

Global Sales Matter and Europe Needs a 4-Cylinder Camaro
The Chevrolet Camaro has been available in Europe for some time now, but it has only been offered as “the Camaro”. There is no SS after the name, but the only option that European buyers have had in the past few years is the car that Americans know as the Camaro SS and that includes the 6.2L LS3 V8. Sounds like a good problem to have, but the lack of a base model engine makes the European Camaro too expensive for most people. Also, European emission standards make the gas guzzling V8 Camaro far less attractive to those who aren’t concerned with having over 400 horsepower…and that is where a turbocharged 4-cylinder engine comes into play.

The biggest reason for the introduction of the 2015 Ford Mustang EcoBoost is that it will be marketed on a global level and while the Mustang GT will battle the European Camaro V8, the new EcoBoost package will provide an option for those folks who want the look of the new Mustang – but with better fuel economy and less engine emissions. Plenty of 2015 Mustang buyers outside of North America are likely to prefer the EcoBoost Mustang with less power and a lower price point and if General Motors doesn’t offer a similar engine, the Camaro will most certainly struggle to compete with the Mustang on a global level. As much as GM doesn’t want to be one-upped by Ford in the US market by the EcoBoost 4-cylinder simply because it will look bad on paper, failing to compete with the EcoBoost Mustang in Europe could have a massive impact on Camaro sales.

The Turbo 4 from the Cadillac ATS Won’t Suffice
All of the rumors that state there is indeed a 2016 Chevrolet Camaro coming with a turbocharged 4-cylinder on the way suggest that the engine in question could be a similar 2.0L mill to what is used in the Cadillac ATS. The problem with that theory is that with the ATS has “only” 272 horsepower and 260lb-ft of torque – which would make for one awfully low performance Camaro. For comparison, the 2015 Mustang EcoBoost packs 310 horsepower and 320lb-ft of torque; which makes it more powerful than the base V6 Mustang with 300 horsepower and 280lb-ft of torque. On the other hand, the current base model Camaro with the 3.6L V6 packs 323 horsepower and 278 horsepower so the ATS turbo 4 would fall well short of the Camaro’s V6.

Because of the power and efficiency of the current V6 Camaro, General Motors would need to develop an engine – or a derivation of the Cadillac 2.0T – that offers a whole lot more power than the ATS 4-cylinder. While having this far less powerful engine in Europe would give Camaro buyers who want an alternative to the V8, GM would have a hard time sizing up against the EcoBoost Mustang.

In other words, GM needs a turbocharged 4-cylinder engine for the 2016 Camaro, but the 6th gen Chevy muscle car needs an engine that is at least on par with the base model V6 and the 2.3L EcoBoost engine from Ford. Even if only for the European market, the 2016 Camaro needs a turbocharged 4-cylinder engine that offers comparable power, efficiency and emission levels to the new Mustang and without that – Ford could dominate the global muscle car war.

Mark Day wrote on August 19, 2014 - 8:09pm Permalink
…so I wanted to take a quick look at why General Motors “needs” to offer a 4-cylinder … What "needs" to be accomplished is eliminating the unauthorized federal agencies that nearly destroyed the American auto industry with mileage and emission demands. Kowtowing to the never ending burden of unelected agencies (432 federal agencies), and their/our employees, is not too bright.
Rathmullan wrote on August 20, 2014 - 3:28pm Permalink
I agree Patrick. Perhaps the answer is to use a turbocharged variant of the 2.5 liter available in the Malibu and Cadillac CTS. However, the specs on that engine in normally aspirated form are so weak that I'd have a hard time believing that a single turbo could push that engine beyond 285 hp - and what would be the point of that? I suspect we won't see a 4 cylinder in the first model year of the 6th gen Camaro.
ingima wrote on August 21, 2014 - 11:07am Permalink
they should do a twin turbo 2.5 4 cylinder and that should make over 300 HP.
Rathmullan wrote on August 21, 2014 - 12:53pm Permalink
Yes, ingima, I suspect a twin turbo on the 2.5 liter could push hp output well over 325 hp. Problem with turbo chargers is that they are weighty. A twin turbo on the 2.5 could add 150+ lbs to the weight of that engine and could be counter productive for a host of reasons. We'll see what GM ultimately comes up with. I personally don't care as I all I want is a 6th gen Camaro with the LT-1 engine matched to either a 6L90 or 8L90 automatic transmission. But I agree with Patrick that for the purpose of marketing the car in Europe, GM needs a 300 hp + 4 cylinder in the car while keeping its weight around 3,600 lbs (or less).
choff wrote on July 2, 2015 - 9:17am Permalink
the Camaro needs more HP but, please please please build me a Cruze HB with this engine and a 6 speed manual tranny - oh, and AWD, too :)