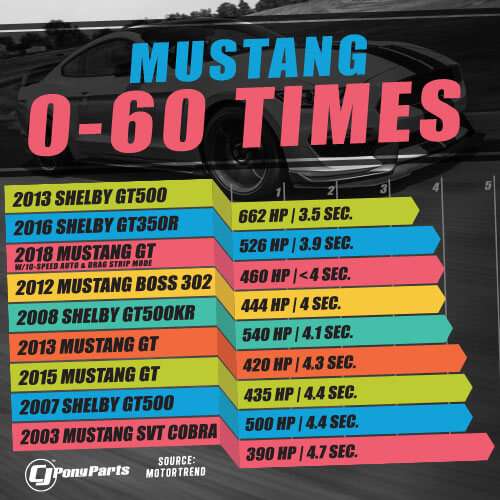 We recently brought you the news that the 2018 Ford Mustang GT is capable of a 0-60 time quicker than 4-seconds flat and upon hearing this news, the team at CJ Pony Parts put together a handy infographic showing how the acceleration times of the modern Mustang has dropped over the past few generations.
Advertisement

In any case, upon hearing that the 2018 Ford Mustang GT would move out from a stop to 60 miles per hour in less than 4 seconds, the Mustang outfitters at CJ Pony Parts put together an infographic showing the 0-60 times (from Motor Trend) of the quickest Mustangs over the past few generations.

The Quickest Ford Mustangs
As you can see in the graphic above, the CJ Pony Parts list of the quickest Ford Mustangs starts with the 2003 Mustang SVT Cobra, better known as the Terminator. There were certainly more powerful Mustangs in the early era of the popular pony car, but when the supercharged Cobra hit the market for 2003, that was really the first time that the modern Mustang was included in the big power discussions. The Terminator allowed Mustang owners to go hunting for Corvette and Vipers, and even today, the 2003-2004 Cobra is a hugely respected performance car. That 2003 Mustang Cobra with the supercharged 5.4L V8 delivered 390 horsepower and hit 60 in just 4.7 seconds.

The next car on the list is the 2007 Ford Shelby GT500 Mustang, which reintroduced the GT500 name to the Mustang lineup for the first time in decades. Like the Terminator, the 2007 GT500 featured a supercharged V8, delivering 500 horsepower and allowing the car to dash to 60mph in just 4.4 seconds.

The next two cars as we head up the list are the first two which show the vast improvements of the Mustang over the years, as the 2015 Mustang GT with 435hp and the 2013 Mustang GT with 420hp both beat these incredible performance machines from 2003 and 2007. They fell just short of the 2008 Shelby GT500 Kind of the Road models with 540hp and a 0-60 time of 4.1 seconds, but in running from a stop to 60 in 4.4 and 4.3 seconds, the 2015 and 2013 Mustang GT were really the first “GT” models to offer the type of performance which has become common in the modern era of the American muscle car.

The 4th quickest Ford Mustang in history is the 2012 Boss 302, which was built for road racing, but with 444 horsepower, the specially tuned 5.0L V8 allowed the modern Boss to hit 60 in 4 seconds flat.

This brings us to the 3rd quickest Ford Mustang ever – the 2018 Mustang GT with the 10-speed automatic and the new Drag mode. In taking “under 4 seconds” to get to 60, CJ Pony Parts put the 2018 Mustang GT one spot above the Mustang Boss 302 at 4.0 and one spot below the 2016 Shelby GT350R, which hits 60 in 3.9 seconds. Depending on the official, actual 0-60 time, the 2018 Mustang GT could conceivably jump into the 2nd spot, but for now, it is in a comfortable 3rd between the modern Boss and the newest Shelby models.

Finally, we come to the quickest and most powerful factory-built Ford Mustang to date – the 2013 Shelby GT500. That supercharged beast delivered 662 horsepower and 631lb-ft of torque, allowing it to sprint from 0 to 60mph in just 3.5 seconds.

Thanks to CJ Pony Parts for putting together this graphic showing how far the Mustang – particularly in the high volume GT form – has come in the past few generations.