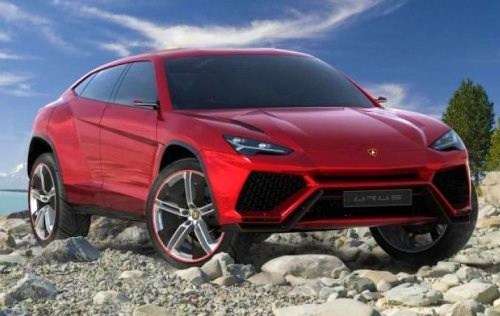 We have known for months now that Lamborghini would soon unveil an ultra high performance sport utility vehicle and today, we have our first look at the new Lamborghini Urus via leaked images that have shown up on the internet – giving us a pretty comprehensive look at the new super-ute ahead of its Beijing Auto China debut.
Advertisement

We just learned yesterday that the new Lamborghini sport utility vehicle would be called the Urus and thanks to the invite to the Beijing debut of the new show, we got our first official look at the shapely silhouette of the new Italian super sporty SUV. However, the mystery around this new Lambo ute has been revealed as the images on the right have popped up on the internet this morning – presumably giving us a look at the new Lamborghini Urus that will make its public debut next week in Beijing.

The design of the Lamborghini Urus shown in the images on the right are certainly boast some extreme, far out styling. If this vehicle was coming to an auto show from pretty much any other automaker in the world; we might guess that it was strictly a concept that won’t see production but when you consider the extremely unique vehicles issued by Lamborghini in the past decade – we believe that this could be the new production-ready Lambo SUV.

The front end styling of the Lamborghini Urus is similar in the basic design structure to the current Lamborghini lineup with the Urus name plainly visible on the front and back license plates. Along the side, the Urus has a very strong stance with a heightened rear end accented by huge flares around the rear wheels. Out back, the Lambo SUV has a sinister look with a taillight that runs the width of the vehicle, joined by four angular exhaust tips poking through the lower fascia.

Inside, the Lamborghini Urus really departs from the norm with some unique seats that appear to have rigid rear structure covered with ergonomically located pads to support the driver and passengers. The seats are truly unlike anything we have seen before and it will truly set the Urus apart from other super sport utility vehicles if this Lambo ute meets production with these interesting seats in the front and back. The dash, steering wheel and gauge cluster are typical Lamborghini designs while the shifter is mounted in a high riding center console that runs the back through the rear seats.

Little information is known about the drivetrain of the new Lamborghini Urus SUV but rumors suggest that it will be powered by a 5.2L V10 that channels around 584 horsepower to all four wheels. The Urus will likely be built on the same platform as the current Porsche Cayenne but many expect the Lambo to be lighter than the Porsche – combining with the bigger engine of the Italian super SUV to possibly introduce the world to the best performing sport utility vehicle in the world.

We will be keeping our collective ear to the ground – bringing you any additional news on the new Lamborghini Urus as it becomes available. Worst case scenario, we have to wait until it makes its debut in Beijing next week.