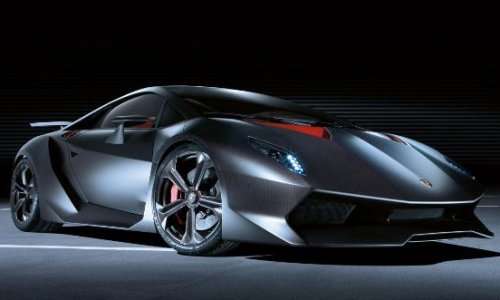 While the incredible Lamborghini Sesto Elemento will hit the market in very limited numbers and those few units will not be legal for street use, that doesn’t make the official specifications of this lightweight supercar any less impressive and thanks to an automotive news site in the Netherlands - we have a good idea what to expect when the Sesto Elemento arrives in the garages of multi-millionaires around the world later this year.
Advertisement

The Lamborghini Sesto Elemento was first introduced as a concept car at the 2010 Paris Motor Show and while it wasn’t that unlike the rest of the super angular raging bulls from Sant'Agata, it was the most extreme supercar ever offered up. About a year later, it was announced at the 2011 Frankfurt Motor Show that the Sesto Elemento would enter production in almost the exact same form as what we saw from the concept in Paris but the bad news was that only 20 units would be built and it would be a race only model. In other words, the Sesto Elemento will be very hard to get and if you are one of the 20 lucky buyers, you won’t be able to drive it on the street anywhere in the world.

The bad news is that the production ready Lamborghini Sesto Elemento will seemingly still be limited to 20 units and it still won’t be street legal anywhere in the world (unless the buyer owns his or her own private roads) but the good news is that the production model will not stray far from the incredible concept. The Sesto Elemento will not be street legal due to the high costs of making a car street legal in those areas where Lamborghini sells the most cars and this includes the headache of emission testing and the agony of crash testing the Italian supercar. By making the Sesto Elemento a race only model, the company does not need to worry about any government imposed safety or emission regulations. However, the company does plan to reinforce the Sesto Elemento’s structure for improved safety on the track which will also make the full carbon fiber chassis a bit stiffer.

Sesto Elemento translates to read “Sixth Element” and the sixth element on the periodic table is carbon – and almost every aspect of this incredible Lamborghini supercar is comprised of high tech, lightweight carbon fiber. Unlike the current Lamborghini Aventador which uses a great deal of carbon fiber with aluminum subframes, the Sesto Elemento structure will be comprised entirely of carbon fiber. The chassis will be built with an individual front and rear carbon fiber portion that will be fitted with fasteners so that the race teams (or the mechanic of the millionaires who will buy the Sesto) can take the car apart for easier maintenance. Inside, there is no traditional interior layout with seats bolted into floor of the carbon fiber monocoque but instead, the floor of the monocoque has a molded area that is custom fit to each driver and padding is added to make the seat more comfortable. Basically, rather than a seat being bolted into the high tech interior, the seat is actually a part of the chassis with pads and leather to provide the look of a traditional seat. This unique seating design joins forces with the rest of the carbon fiber panels to provide an incredibly low curb weight – weighing right around 2,200 pounds.

Tucked under the body work of the Lamborghini Sesto Elemento is the same 5.2L V10 engine that powers the Lamborghini Gallardo with 562 horsepower and 398lb-ft of torque being channeled to all four wheels via a 6-speed automated manual transmission and an advanced all wheel drive setup. The result of combining this high performance drivetrain with the ultra lightweight Sesto Elemento design is a supercar that will rip from 0 to 60 miles per hour in only 2.5 seconds while hitting a top speed that will most certainly be well above the 200mpg barrier.

The Lamborghini Sesto Elemento is expected to enter production later this year and unlike the rest of the Lambo lineup, the Sesto will be hand built at the company’s new prototype and concept design facility. As stated so many times, only 20 units will be built and each of those carbon fiber Italian marvels of modern automobilia will carry a price somewhere in the area of $2.6 million US Dollars.

Check out the gallery of the Lamborghini Sesto Elemento Concept by clicking any of the thumbnails above on the right!

A special thanks to Max for the translation assistance!