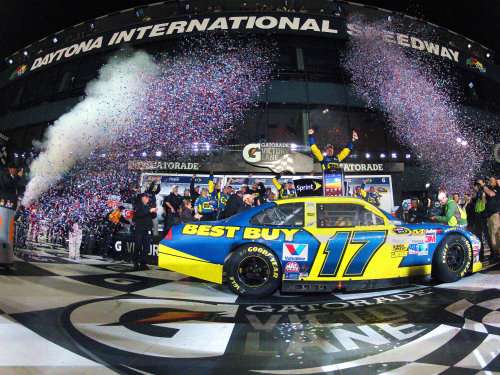 Last night at 7pm, the 54th running of the Daytona 500 got underway some 30+ hours later than expected and after an incredible 6+ hours in the first primetime running of the Great American Race, Matt Kenseth drove the #17 Best Buy Ford Fusion to victory lane in what was surely one of the most bizarre races in NASCAR history.
Advertisement

The 2012 Daytona 500 became unique this past Sunday when NASCAR officials announced that the 54th running of the Great American Race would be the first ever to be postponed due to rain. Daytona International Speedway was pounded by steady rain all day on Sunday so NASCAR officials made the decision to run the race at Noon on Monday but by 10am that morning, the rain had not let up so the start was pushed back to 7pm. This meant that there would be a better television viewership as the Daytona 500 made its primetime TV debut and those who did tune in were in for one of the most unusual races in the history of the sport.

Many people say that they watch NASCAR for the wrecks and for those folks – the 54th running of the Daytona 500 started like a dream come true. On the second lap of the race, Elliot Saddler bumped defending series champ Jimmie Johnson, sending Johnson’s #48 Chevy Impala hard into the outside wall in front of a huge pack of race cars. As Johnson’s car bounced off of the wall, he came back down the track in front of the pack and created a huge chain reaction wreck that gathered up the 2011 Daytona 500 winner Trevor Bayne along with other drivers including David Ragan, Kurt Busch, and Danica Patrick. Johnson was done for the night along with Ragan while Busch (39th), Danica Patrick (38th) and Bayne (35th) would return after some time in the garage to repair their vehicles. Saddler would go on to finish 27th. The video below shows the lap 2 crash on YouTube.

There were more wrecks throughout the race, including incidents on lap 187 and 196 that would bring about a Green-White-Checked 3-lap shootout to the finish but the truly oddest thing about the 2012 Daytona 500 came on lap 160. David Stremme, who pilots the Inception Racing Toyota Camry, blew an engine on Lap 157 to bring out a caution and the majority of the field pitted while the Daytona International Speedway track crew scrambled to clean up the mess created by the blown Toyota V8. During those pit stops, Juan Montoya’s pit crew was looking around underneath the car for something that was causing a vibration but when nothing was found – Montoya soared back onto the track in his #42 Target Chevrolet Impala and sped around the backstretch to catch up with the field for the restart.

As Montoya’s Impala stock car screamed down the backstretch at the Daytona 500, a stationary camera above turn three catches sparks spewing from under the passenger’s side of the car as Juan continued to tell his crew that something was wrong. The car neared Daytona’s turn 3, where the track cleaning crew was working on drying up some of the spilled oil from Stremme’s blown engine with a pair of jet dryer trucks, when Montoya lost control of the car. The nose of the car turned hard to the outside wall, spinning towards the wall but instead slamming into one of the jet dryer trucks – resulting in an incredible explosion that is just off screen but you can see the flash of the explosion in the video below.

Juan Montoya’s Impala came to rest in the grassy inner track area and the driver climbed safely out of the burning car and over to the track safety team. However, the jet dryer truck was badly damaged and immobilized – with hundreds of gallons of diesel fuel mixed with jet fuel poured out of the rear of the truck and down the 31 degree banking of turn 3. Then there was a spark, igniting the mixture of diesel fuel and jet fuel and literally setting the track on fire and forcing the 54th Daytona 500 into a red flag situation.

The result was a massive inferno took the fire team quite a bit of time to extinguish but the result was even worse, as between the fire and the amount of fuel dumped on the track, there was significant damage to the racing surface. It took the NASCAR crew around two hours but at 11:57pm, the drivers were back in their cars and moving around the track. The track crew had to scrub the track with Tide detergent and flush it extensively with fire hoses, as well as putting down track repair material to fit the damages done by the fire and by the truck being dragged off of the racing surface.

My dad got me into NASCAR when I was a little kid, having taken me to pretty much every major track over the years but in all of my 33 years of loving auto racing – I have never seen anything is unbelievable as Juan Pablo Montoya’s collision with the jet dryer truck. Between the mere fact that Montoya slammed into the truck and the ensuing fire, this was easily one of the most remarkable cases of a wreck being caused by being in the wrong place at the wrong time. The chances of Montoya’s car going out of control at that exact point on the track – just as the jet dryer truck crew was servicing that portion of the track – are so incredibly low that this is one of those things that motorsports will probably never seen again. Ultimately, the most important news is that both Montoya and the driver of the track service truck were both fine after the accident.

After the two hour delay for the jet dryer truck collision (which I still cannot believe happened), the 2012 Daytona 500 got back under way with 40 laps remaining. The full speed racing last until a wreck involving Casey Mears and Marcos Ambrose on lap 176 and another large crash involving Brad Keselowski, Carl Edwards and Jamie McMurrary slow the race once more. Finally, on lap 196, there was yet another multicar crash that took out top competitors like Tony Stewart and Kyle Busch that would force NASCAR to go with the green-white-checked finish.

In the end, Matt Kenseth would pull away from second place Greg Biffle, who was caught and passed at the end by Dale Earnhardt Jr., forcing Biffle into third place at the finish line.