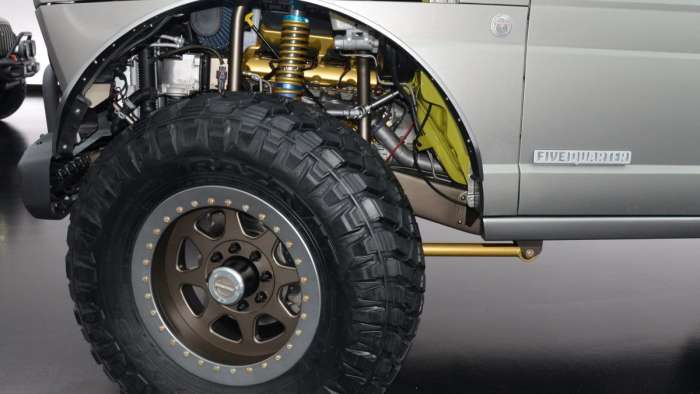 This modified 1968 M-715 is one of the coolest classic Jeep pickups we have ever seen, and only partially due to the Hellcat Hemi.
Advertisement

On Saturday, April 13th, the 53rd annual Easter Jeep Safari will kick off in Moab, Utah, and the stunning M-715 military pickup will be one of six modified trucks unveiled by the automaker. The other five tracks that were modified by Mopar and the Jeep Performance Parts team are all based on the modern Gladiator pickup, but this truck – named the Five Quarter – is based on a classic Jeep pickup.

Over the next few days, we will bring you a closer look at all of the vehicles being displayed by FCA at the Easter Jeep Safari, but today, we want to walk you through the 1968 M-715 shown here.

The M-715
Back in the 1960s, Jeep offered a Wagoneer-based pickup called the Gladiator and there was a military version called the M-715. The M-715 was also called the Five Quarter, due to its 1.25-ton payload capacity, and these hefty trucks were used at American military installations in several different areas, including Vietnam, Korea and Europe.

The stock engine in these antique Army trucks is a 230.5-cubic inch inline-six with an overhead camshaft design and a meager output of 132.5 horsepower. That engine afforded the 2.5-ton pickup a top speed of about 55 to 60 miles per hour, but the M-715 was built to be rugged, not fast.

The truck, shown here, actually began its life as a military-use Jeep M-715 back in 1968, but FCA reacquired it through a for-sale listing on the internet. It was shipped to Auburn Hills, where the Jeep and Mopar teams went to work, transforming it from a tired, old Army truck to the Hellcat-powered behemoth that you see here.

Powerful Exterior
In standard form, a 1968 M-715 has a pretty rugged look to it, but the design team took it to the next level while preserving the overall shape of this classic truck.

Upfront, the standard steel hood has been replaced with a custom, contoured carbon fiber unit that flips forward to reveal the supercharged Hemi, but we will talk more about that in a minute. The “face” of the truck is the same, with a large central grille flanked by two large lights and two smaller lights, but for this Moab machine, the outer lights (originally the headlights) are huge off-road LEDs and the inner lights (originally the amber turn signals/parking lights) are now vents for the supercharged Hemi. Also, the standard front bumper of the Army truck has been replaced with one from a modern Gladiator Rubicon. 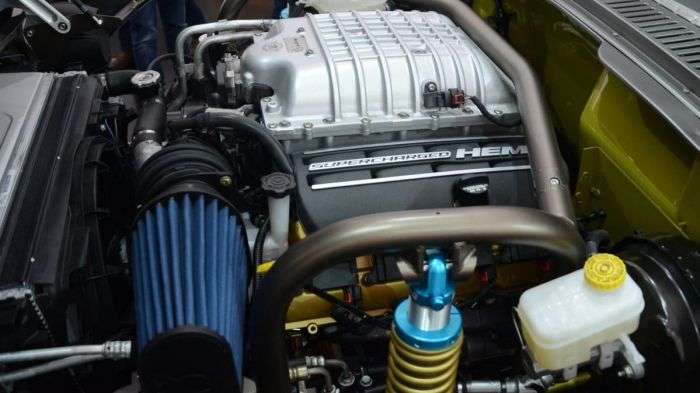 Along the sides, the Five Quarter has the same basic cab, but the windshield has been chopped by 3.5-inches and a canvas convertible top has been added. The flares are similar to the standard military design, but they extend out further and appear to be a bit bigger, allowing plenty of room for the massive 40-inch off-road tires to move around.

Outback, the original steel bed is gone and in its place is a unique aluminum cargo box that has open-mesh sides, an interesting slatted floor, and an open-style tailgate. This openness would allow you to keep large cargo in place while mud, water, and other off-road debris would be able to drain out while the truck is in motion. It also looks absolutely incredible.

Simple, Stunning Cabin
On the inside, the Jeep Five Quarter has bucket seats from a new Wrangler with the headrests removed and a custom leather skin. There are custom aluminum door panels, custom aluminum gauge inlays and what might be the coolest shift console I have ever seen. It is constructed from the outer case of an old 8-71 supercharger.

Monster Performance
While this custom truck looks incredible inside and out, the modified machines that Jeep and Mopar send to Moab have to be able to perform, so the entire drivetrain of the M-715 was removed. The stock axles were replaced with a Dynatrac Pro-rock 60 front axle and a Dynatrac Pro-rock 80 axle in the rear, with the front axle shifted forward two inches, making more room for the Maxxis 40-inch tires on 20-inch beadlock wheels.

In terms of the suspension, the stock leaf springs were replaced with heavy-duty link and a King coilover system, complete with some custom tube chassis work.

Finally, the key upgrade to this 1968 Jeep M-715 is under the hood, as the original inline-six with 132.5 horsepower has been replaced with a supercharged Hemi V8. As you likely know, the supercharged 6.2-liter Hellcat Hemi produces 707 horsepower and 650 lb-ft of torque, and that power is sent towards the wheels by means of a modified Chrysler 727 TorqueFlite automatic transmission.

During the media preview, Jeep designer Mark Allen fired up the Five Quarter for us, and it was as awesome as you would expect.