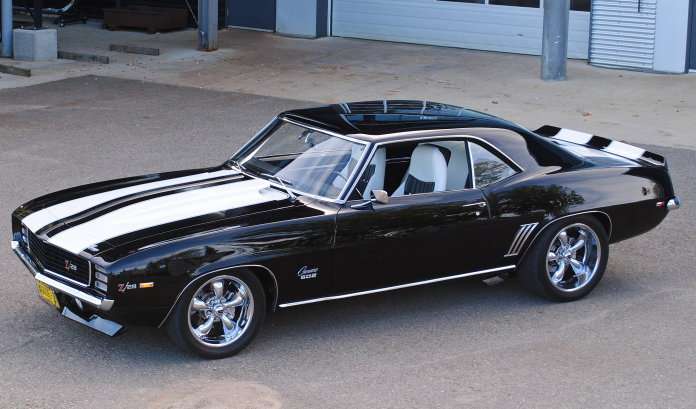 The TorqueNews/Camaros Unlimited Camaro of the Month for January 2018 is the 1969 Camaro RS Z/28 replica shown above, owned by Ron Rabe.
Advertisement

Each month, TorqueNews works with the members from the Camaros Unlimited Facebook page to select our Camaro of the Month. The process begins with the members of the Camaros Unlimited Facebook page – nearly 42,000 of them – nominating their favorite Chevrolet Camaro owned by a fellow member of the page. Once five (sometimes six) cars/owners have been nominated, the voting begins and when the balloting closes – we have our Camaro of the Month.

For January 2018, the Camaro of the month is the 1969 Chevrolet Camaro RS Z/28 replica shown above, owned by group member Ron Rabe of Manitoba, Canada. We asked Ron for some information on his stunning ’69 Camaro, and below you will find the rundown on this classic Chevy muscle car.

The Story of Ron Rabe’s 1969 Camaro
I have been hooked on 1st Gen Camaros since I was in my teens back in the 80’s. There were very few of these around in our area and I always dreamed of fixing one up. I bought an ’81 Z/28 with T-Tops while in University and had a lot of fun with it for a few years. I did the usual intake and cam swap adding headers, shift kit, etc.. Great learning experience and took it to the track a few times. I sold it eventually and focused on family and managing our farm.

Over the years I kept thinking about owning a ’69 Camaro and exactly how I would modify it if I ever had the chance. I am very busy from spring to freeze up every year and realized I would have to save and buy the car as I don’t have the time and heated shop to build a car from ground up here in winter.

I spent the better part of 8 years looking for this car and was actually working on getting one custom built when I found this car. It was hard to find a pristine SS or Z/28 trim Camaro with a 502” big block, and 5 or 6 speed manual that was built right to cruise or take to the track.

This car was built in Ohio for the Hot Rod Power Tour and participated for 2 years, then was sold and went to Tennessee. Southern Motors from Clarkston, MI found it at the Pigeon Forge Rod Run and I bought it from them in 2014. It was everything I was looking for and then some!

This car was exactly what we had looked for as it drives like a new car and ride height is easy to adjust with the coil overs and rear air shocks. Ride height is about 2” lower than stock and car has a great stance. The big block makes around 570hp with loads of torque. The 5 speed really helps the driveability with the 4.10 rear. All the acceleration you want with mileage you can live with on the highway. Traction is a bit of a problem, lol. We put about 1200 miles a summer on the Camaro taking it to car shows and just cruising. The licence plate reads “AGGIE-Z” as I am a U of Manitoba Ag alumni and very involved as an advocate of Agriculture and “Aggies”.

We have enjoyed the car show circuit but like to see new cars at new shows so don’t go to a lot of same shows repeatedly. I love seeing the innovation and imagination other people put into their cars. I am a member of the Western Canada Camaro Club. We have won ISCA Outstanding Custom, ISCA Outstanding Engine-Custom and 1st place in our class at 2015 World of Wheels in Winnipeg, Manitoba. It has been an honor to win People’s Choice or Best in Show at numerous other car shows, but I really enjoy talking with other car owners about their cars the most. We had looked for so long to find a great driving Camaro and that is exactly what this is. The sound of that cam is a crowd favorite with the header cutouts open on cruise nights and it has won loudest car at 3 shows so far at 122 decibels!

I would really like to thank Torque News for featuring our car, and for Camaros Unlimited and members for voting for this car. There are so many fantastic rides to see and great support for other members when they need technical help. Last but not least I would like to thank my wife for sharing in my love of classic cars and she joins me at shows or cruising in her ‘94 Trans Am.

For more pictures and videos of Ron’s Camaro, look him up on Instagram @back40racing.