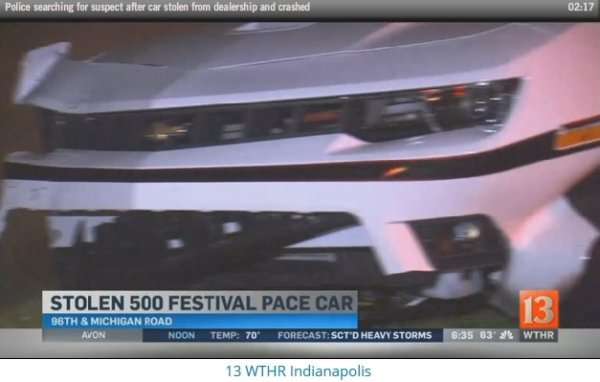 Last week, we spoke with a representative of Bill Estes Chevrolet about the 2015 Camaro Festival Cars for the 2015 Indy 500 and today, I bring you the news of one of those limited edition Camaros being stolen, wrecked and abandoned on the side of the road – and local police are hunting for the man responsible.
Advertisement

For those who missed our original piece here on TorqueNews, the 2015 Chevrolet Camaro SS Convertible is serving as the official “Festival Car” for the 2015 Indianapolis 500. In past years, these Festival Cars have been used by race officials in the Indianapolis area and when the race has been run, these cars are sold as used, limited edition vehicles at dealerships around Indiana. For the 2015 race, the Chevrolet Camaro SS Convertible has been chosen as the Festival Car, but in addition to the 50 official use cars, Chevrolet has built 50 more examples of the limited edition muscle car that will be sold at dealerships as new. Click here for a closer look at the 2015 Indy 500 Camaro Festival Car.

Those 50 limited edition Indy 500 Festival Car Camaro Convertibles have begun showing up at dealerships and last week, I spoke with Judie Scott of Bill Estes Chevrolet. She was good enough to provide me with all of the information on these limited edition race-themed Camaros along with sending over some pictures of their first Indy 500 Camaro.

Unfortunately, that 1 of 50 2015 Chevrolet Camaro SS Convertible Festival Car was stolen Wednesday night and when the damage from the theft of the car was so substantial that the engine failed, the limited edition Camaro was abandoned on the side of the road.

The Daring Theft
On Wednesday night, a white male with no shirt and glasses broke into Bill Estes Chevrolet and after rummaging around a bit, the thief came across the keys for the same 2015 Camaro Festival Car that we featured last week. The car was inside of the dealership, so after finding the keys to the unique Camaro, the crook had to drive through the showroom, smashing through a large plate glass window and down a small flight of stairs before hitting the road. Unfortunately for the thief, the damage to the Camaro was so severe that the engine failed a few miles away. Based on the local news footage, the jump down the stairs likely damaged the cooling system so within a few miles of driving with no coolant, the LS3 engine overheated and died.

Also unfortunately for the thief, driving through the large glass windows of the dealership with the top down caused the driver enough injuries that his blood was splattered around the interior. After the Indy 500 Camaro SS died on the side of the road, the thief knocked on the door of a nearby home asking for help, but seeing the bloody man on the doorstep in the middle of the night provoked a call to the local police. Police arrived and found the car a short time later, but the crook was gone.

The worst bit of news here is that Bill Estes Chevrolet had already received a deposit on this 2015 Indy 500 Camaro Convertible and the buyer was planning on picking the car up today. I spoke with Judie Scott again today, and she explained that the damage was substantial, but it does look like the car will be repaired.

Again, for anyone in the Indianapolis area who knows a while male who wears glasses and who has received some serious cuts around he face, chest and arms, a call to your local police might help catch this thief.

The video below offers a better look at the damage to the 2015 Camaro Festival Car, starting around 1 minute into the video. Thanks to the folks at BestRide.com for the tip on this!