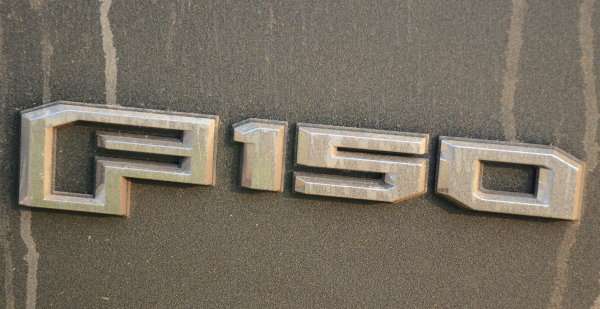 A short video has hit the internet showing what is believed to be a Ford F150 Hybrid test prototype pickup driving out on the open road, with unusual camouflage on the fenders and word from the person who captured the video that at 35mph, the engine clearly down as it went into an EV mode.
Advertisement

While there has been little formal information from the Motor Company about the future of a super-efficient Ford F150 pickup, it is widely believed that we will see both an F150 with a small diesel engine and another F150 with a gasoline-electric hybrid drive system. We have previously seen video of what was almost surely an F150 test truck with a diesel engine and now we have our first video of what is reportedly a hybrid F150.

A Hybrid F150?
This video comes from the folks at AutoGuide, whose spyshooters caught this Ford F150 test truck out on the open road. There is no question that this is an F150 test truck thanks to the unmistakable camo on the front fenders, but if you look carefully at the video around the 10 second mark, there appears to be an odd break in the pattern of the camo. There seems to be little reason to access that portion of the fender on most vehicles, but many plug-in electric vehicles have their charging ports in that area. For example, the Chevy Volt and the Ford CMax both have charging ports on this area of the driver’s side fender, so while it seems a little odd that the charging port would be on the passenger’s side – it isn’t out of the question.

However, the individual who captured the video told AutoGuide that around 35 miles per hour, he heard the gasoline engine shut down, followed by the sound of an electric drivetrain. This also seems feasible, as a gas-electric hybrid pickup would likely have a mode where the vehicle is cruising strictly on battery power, but could you really have the relatively quiet engines of the F150 shut down while cruising in another vehicle at 35mph?

In any case, the odd camo pattern on the fender and the word from AutoGuide is enough for me to believe that this could be a hybrid F150 test truck. Also, it appears to be a two wheel drive model and I would expect that the hybrid F150 trucks will be rear wheel drive.

Considering Ford’s advancements in their hybrid program over the past few years, becoming the biggest rival to Toyota in the hybrid vehicle segment, it seems perfectly reasonable that the company would offer up a gas-electric hybrid pickup. There have been hints from Ford execs in the past about a hybrid F150 and this might just be our first look at one of those super-efficient, electric-aided half ton pickups.

Connie Bunyard wrote on April 15, 2016 - 5:41pm Permalink
You do realize that the 2.7 ecoboast turns off when you stop to conserve gas?