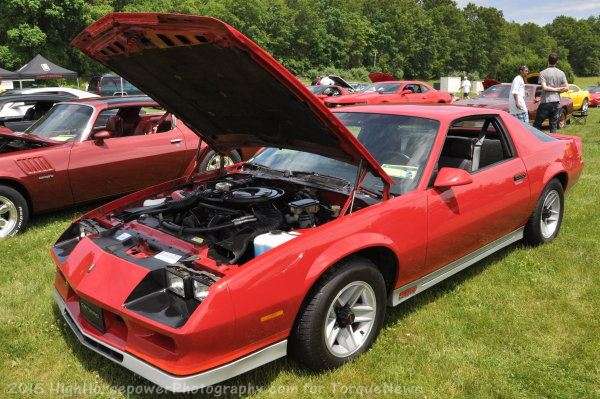 Last week, we brought you a detailed look at the engine options for the 1st and 2nd generation of the Chevrolet Camaro, after General Motors had rolled out a brief engine history of their own. Those first two installments covered the early glory years of the GM muscle car, but with the arrival of the 3rd gen Camaro in 1982 came growing concerns about fuel economy. Because of this, Camaro power levels dipped to all-time lows early in this era, but the numbers grew to be far more respectable towards the arrival of the 4th gen Camaro in 1993.

1985
The 1985 model year for the Chevrolet Camaro brought with it the lowest horsepower rating ever for the GM muscle car, as the output of the 4-cylinder engine was down to 88 horsepower. Fortunately, 1985 also saw the introduction of the fuel injected LB8 V6, which offered 135 horsepower compared to the 107 offered by the previous V6. The LG4 5.0L V8 was up to 155hp while the L69 V8 remained the same at 190 horsepower. Finally, new for 1985 was the fuel injected LB9 5.0L v8 with 215 horsepower.

1991-1992
The engine lineup for the 1991 Camaro was identical to the previous model year, with the only exception being a decline in power of the LB9 with the automatic transmission down to 205hp. All other power figures remained the same and the 1991 engines would be totally carried over for the final model year of the 3rd gen Camaro in 1992.