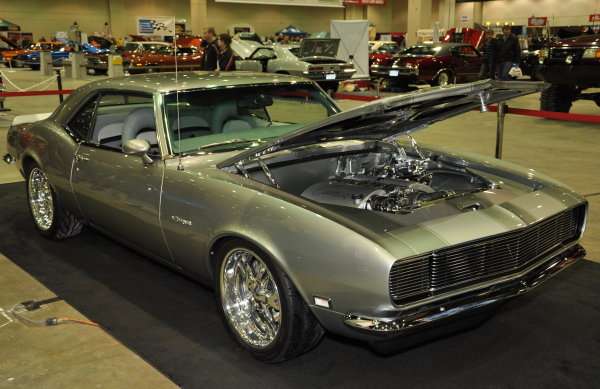 While General Motors has been unfortunately quiet about the upcoming 6th gen Chevrolet Camaro, the automaker has seemingly begun the slow teasing process for the 2016 model, running through a list of the engines that have motivated the classic Chevy muscle car since it was introduced for 1967.
Advertisement

We know that the next gen Chevrolet Camaro is coming for the 2016 model year, but General Motors has been surprisingly quiet about the 6th gen muscle car over the past year or so. This left us to rely on rumors, spy shots and leaked information when discussing the 2016 Camaro, but beginning with a shadowy teaser of what is believed to be the next gen car in videos at both the Detroit and Chicago auto shows, GM has seemingly started their slow tease of the new muscle car.

The newest bit of Camaro related information from General Motors doesn’t offer us any insight into the 2016 Camaro, but it does run through the list of engines that have powered the popular muscle car since the debut back in 1967. GM only touched briefly on the engine options during the early years, but I’ve done some digging and found full lists of available engines for every model year Camaro. Since the Camaro has such a long and storied history, a rundown of every engine over the past 48 years would be incredibly long, so we will look at each generation on its own – beginning today with the original Chevrolet Camaro. This includes the 1967, 1968 and 1969 Camaro, which were the most powerful of the famous muscle cars until the current (5th) generation models were introduced.

1967
While the Ford Mustang had smaller, less powerful engines when it was introduced in 1964, the Chevrolet Camaro came out with a big spread and big power when it met the world in 1967.

1968
For 1968, all of the 1967 engines returned, but there was a new 396 that offered 350 horsepower in the Camaro SS. The 1968 model year Camaro also had the L89 package, which added aluminum cylinder heads to the SS350 and SS396, which helped reduce engine weight by roughly a hundred pounds.

Also in 1968, while there were no 427 cubic inch V8s offered by GM, a few dealerships around the country began ordering 427 V8 engines from GM and installing them in customers’ Camaros. This was the first step towards the legendary COPO Camaro.

Stay tuned for part 2 of our Camaro engine history, where we look at the lengthy second generation muscle car!