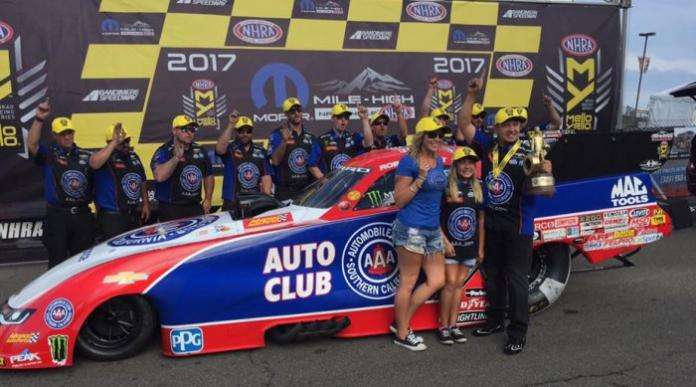 Robert Hight and his John Force Racing Chevrolet Camaro funny car finally put a stop to the 10-race win streak by the Don Schumacher Racing Dodge Charger funny cars and Hight did it at the Mopar Mile High Nationals – giving the John Force team its second win of the season.
Advertisement

Coming into the Mopar Mile High Nationals at Bandimere Speedway in Colorado, a Don Schumacher Dodge Charger funny car had won ten straight races and 12 of the first 13 races of the 2017 NHRA season. Schumacher’s quarter of drivers have left no question which team is the dominant force in the funny car class, but Hagan, Capps, Beckman and Johnson watched their win streak end at the event sponsored by the brand which powers them.

Qualifying
During the course of the first 13 races of the 2017 NHRA season, the Don Schumacher Racing Dodge Charger funny cars have often gotten a slow start in qualifying while the John Force Racing Chevrolet Camaro funny cars have come flying out of the trailers. That was the case at Bandimere this past weekend, as Courtney Force (3.889), John Force (3.899) and Robert Hight (3.973) grabbed the top three spots after the first round of qualifying while Cruz Pedregon (Toyota), Jonnie Lindberg (Toyota), Tim Wilkerson (Ford) and Alexis DeJoria (Toyota) followed them in the 4-7 spots. Ron Capps was the quickest DSR Charger in the 8th spot with a time of 4.016.

During the 2nd and 3rd qualifying rounds, the Toyotas and the lone Ford in the field would shuffle around in the 4-7 spots, but the trip of JFR Camaros remained at the top of the order with their 1st round times while the DSR Charger drivers continued to struggle in the bottom half of the field.

In fact, Courtney Force and John Force would claim the top two ladder spots for eliminations with their 1st round runs while Robert Hight would hold onto his 3rd place starting spot with a strong run in the final qualifying run – narrowly outrunning Jonnie Lindberg. Also in the final qualifying run, both Ron Capps and Jack Beckman would jump into the top 8 (Capps in 5th, Beckman in 6th), but after qualifying, it most certainly looked like the JFR Camaros had the advantage over the DSR Chargers at the Mile High Nationals.

Eliminations
In the first round of eliminations, there was a shift in fortune, as things were looking up for Don Schumacher Racing and looking down for John Force Racing.

After looking taking the top spots in qualifying, Courtney Force lost in the 1st round to Jim Campbell and John Force lost to Matt Hagan while Robert Hight made short work of Todd Simpson to be the only JFR Camaro to advance to round #2. On the other hand, in addition to Hagan beating John Force, Jack Beckman beat Alexis DeJoria and Tommy Johnson Jr beat Ron Capps, allowing 3 of the 4 DSR Chargers to advance to round #2.

In the 2nd round, Tommy Johnson Jr beat Jonnie Lindberg, but Hight knocked off Beckman while Hagan lost to Cruz Pedregon. Oh, and in a battle of drivers who are barely relevant to the story, 16th qualifier Jim Campbell beat 8th qualifier JR Todd to advance to the semifinals with Pedregon, Johnson and Hight.

In the semifinals, Tommy Johnson Jr crushed Jim Campbell and Robert Hight won a tight race with Pedregon, setting up a Dodge Charger-vs-Chevrolet Camaro final round. A John Force Racing Camaro has faced a Don Schumacher Charger in the finals 3 times earlier this season and in every case, the Charger took the win.

In the finals, Robert Hight and his Camaro grabbed the holeshot lead and never looked back, beating Johnson’s Charger convincingly and taking his 1st win of the 2017 season.

Championship Standings
After 14 of the 24 races this season, Ron Capps and Matt Hagan are in 1st and 2nd, with a big lead over Robert Hight in 3rd. There are 4 races left before the “Countdown to the Championship” round of 6 races and right now, it looks likely that all 4 Don Schumacher Charger drivers and all 3 John Force Camaro drivers will be in the run for the title.