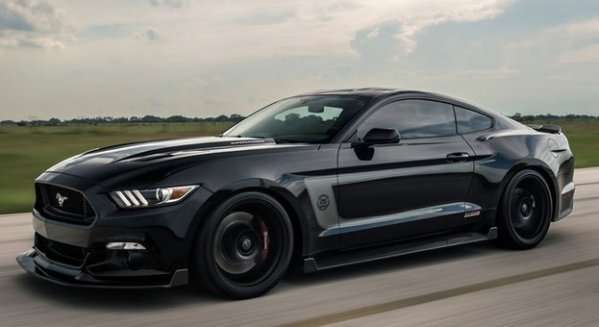 The folks at Hennessey Performance are celebrating their 25th birthday this year and to highlight their silver anniversary, the crew has offered up a special edition of the HPE800 Ford Mustang – with 804 horsepower, 648lb-ft of torque, all of the physical attributes of the HPE800 package and some unique 25th anniversary appointments.
Advertisement

In the world of high performance tuning companies, there are few that are better known than the team at Hennessey Performance. 2016 marks the 25th year of Hennessey creating high performance monsters from American performance vehicles and to celebrate the occasion, HPE has cooked up a special Ford Mustang with their HPE800 package. This Mustang is similar to other Hennessey-tuned Ford pony cars in terms of the basic upgrades, but there is an extra spread of unique appearance upgrades inside and out.

When that HPE800 Ford Mustang GT hits the drag strip, it is capable of running through the ¼ mile in 10.7 seconds with a speed of 133 miles per hour. Also, while there is no official top speed listed for the HPE800 Mustang, we know that the HPE750 Mustang (with “only” 774hp) is able to hit a top speed of 207.9 miles per hour.

In other words, the Hennessey tuned HPE800 Ford Mustang GT is one wicked performance machine, but to enhance the car even more for the 25th anniversary, the company adds unique stripes and badging on the outside along with commemorative badging on the inside.

The price hasn’t been announced, but we know that the HPE800 Ford Mustang 25th Anniversary Edition will be limited to just 25 units, so if you are in the market for a very fast, very limited American muscle car, you might want to contact Hennessey Performance soon – as they are likely to sell out in a hurry.