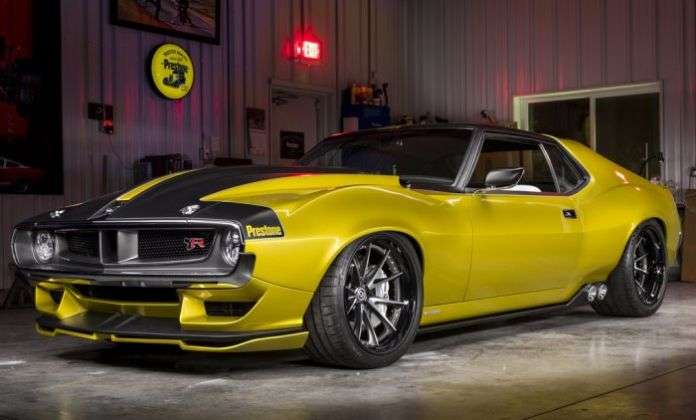 One of the most unique Mopar muscle cars at the 2017 SEMA Show is the Hellcat-powered 1972 AMC Javelin AMX from the Ring Brothers, packing 1,100 supercharged horsepower and a unique carbon fiber-heavy exterior design – creating what is likely the most unique AMX in the world.
Advertisement

The SEMA Show is packed with heavily modified muscle cars, but the 1972 AMC Javelin AMX is likely the most unique show car on the floor of the Las Vegas Convention Center this week. In addition to the custom body work, the Ringbrothers have installed a Hellcat Hemi in the engine bay which has been modified to the tune of 1,100 horsepower, making this one wicked-fast American Motors product.

The Ringbrothers 1972 Hellcat AMX
When this 1972 AMC Javelin AMX hit the street 35 years ago, it was an impressive performance machine with a handful of features designed to help this package shine in the world of Trans Am racing. Back then, the biggest engine that you could get in the Javelin AMX was the 401 V8, which delivered 255 horsepower and allowed this road-hugging muscle car to run the quarter mile in the mid-14 second range.

The Ringbrothers 1972 AMC Javelin AMX was commissioned by Prestone antifreeze to celebrate the company’s 90th anniversary and while this car was impressive in stock form – we all know that a stock muscle car wouldn’t grab any attention at SEMA.

The Ring brothers wanted to enhance the 1972 AMC Javelin AMX in every way and they began under the hood, tearing out the carbureted 401 and replacing it with the supercharged 6.2L Hellcat Hemi. Rather than settling for “only” 707 horsepower, the Ringbrothers Hellcat Hemi is topped by a 4.5L Whipple supercharger that lifts the output to 1,100 horsepower.

Next, Jim and Mike Ring added a spread of carbon fiber body bits, including the bulging hood, the flared front fenders, the grille and the custom lower front fascia – which provides the type of downforce needed to keep the nose down when exercising the 1,100hp. Once the lightweight body was assembled, the majority of the car was painted a unique metallic gold with black trim and the Prestone logo on the front fenders.

The result is an AMC Javelin AMX that looks great and surely runs even better thanks to the 1,100 supercharged Hellcat horsepower. With any luck, after making its big debut at the SEMA Show, the Ringbrothers Javelin will spend some time at the track, as it would be awesome to see what this rare American Motors muscle car would do on a drag strip.