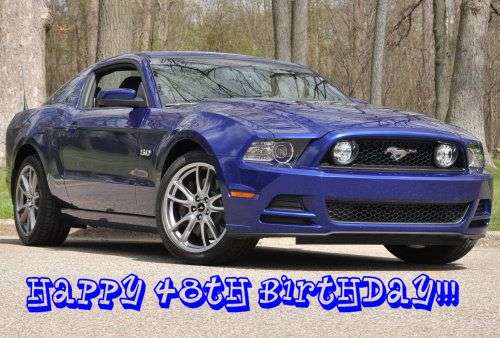 On April 17th 1964, Ford Motor Company introduced a small, affordable sports car at the World’s Fair in New York that would revolutionize the American auto industry and an incredible 48 years later, the Ford Mustang has become the longest running and possibly the most well known American car in the history of the industry.
Advertisement

Today, the Ford Mustang officially turns 48 years old. The mighty Mustang debuted on April 17th 1964 at the World’s Fair and that same day, the Mustang was introduced in showrooms around the country. Billed as the everyman’s sports car, the Mustang was named after the P51 Mustang fighter jet and was offered as a coupe or convertible in the first year with the chassis based on the compact Ford Falcon. Ford expected that the Mustang would be successful with first year sales around 100,000 units but they had no idea just how successful it would be – with a whopping 22,000 Mustang sold on the first day of sales en route to selling 418,000 Mustangs in the first year.

Since then, the Ford Mustang has lasted through thick and thin – with some questionable years for a performance car during the fuel crunch of the 1970s – but in the end, the Mustang is the longest-running car in American history. Before any General Motors fans chime in that the Corvette has been around since 1953, let’s keep in mind that production skipped a year in 1983 where the Mustang has been in production for every model year since being introduced. Considering the impressive nature of a car turning 48 years old, we thought that it would be fitting to take a look at today’s Mustang compared to the 1964 Mustang that debuted on this day 48 years ago.

The first Ford Mustang was available with three engine choices; an entry level inline six making 101 horsepower, a 260 cubic inch V8 with 164 horsepower and most powerful option being a 210 horsepower, 289 cubic inch V8. Today, as the Mustang turns 48 years old, the famous Ford pony car still offers three engine options but the 2013 Ford Mustang six cylinder “entry level” model packs 305hp – more than three times the power output of the original base model Mustang. Where the original Mustang that debuted 48 years ago today packed 210 horsepower from the top of the line V8 engine option – today’s premium Mustang GT500 packs a stunning 650 horsepower and a top speed of over 200 miles per hour. That leaves the current Mustang GT as the “mid range” model with the 5.0L V8 churning out 420 horsepower – quite a difference compared to the 164hp offered by the 260 cubic inch mid range V8 in ’64. The 1964 Mustang was available with a 3-speed or 4-speed manual transmission along with a 3-speed automatic whereas today, the 2013 Mustang offers either a 6-speed manual or automatic transmission. Finally, while the Mustang has gotten far more powerful it has also obviously gotten to be far more expensive with a base price starting around $22,200 where the original Mustang 48 years ago started at just $2,300.

The Ford Mustang has truly withstood the test of time – battling endlessly rising fuel prices, strict new emission standards and an influx of new competition to live on as the longest continuously available American car of all time. Today’s Mustang derives its style from the original and as luck would have it, I am currently driving the awesome new 2013 Mustang GT – which leaves to question in mind my why this car has been so popular for so long. We expect to see a new generation of the Mustang for the 50th birthday of the model and based on the moves made by Ford over the past 48 years to help keep their affordable performance car fresh and popular – we expect to see the Mustang around for a very, very long time.

Toyota's First EV Will Have a Name of BZ: Toyota BZ
First Videos From Inside The Boring Company's Las Vegas Loop
END_OF_DOCUMENT_TOKEN_TO_BE_REPLACED