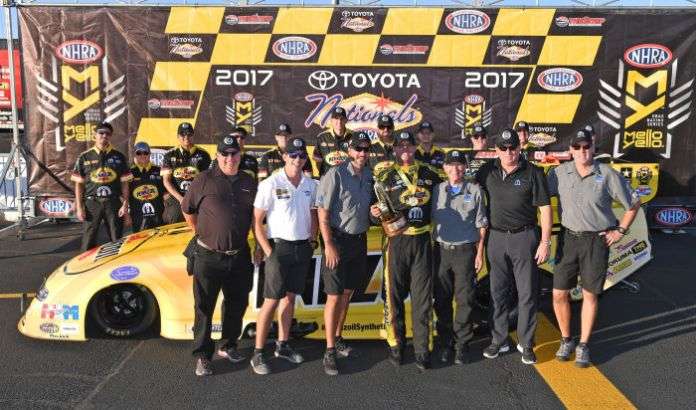 Matt Hagan drove his Dodge Charger funny car to win #4 on the season this past weekend in Vegas, beating Courtney Force in the final round at the Toyota Nationals, but with a first round loss to John Force, Ron Capps slipped from the top spot in the championship race with just one event remaining.
Advertisement

The NHRA Toyota Nationals were held this past weekend in Las Vegas and while Don Schumacher Racing’s Matt Hagan and his Dodge Charger won the funny car finals – giving DSR its 15th win 23 races – Ron Capps’ early exit coupled with Robert Hight’s strong run caused Capps to fall from the top spot in the championship.

Qualifying
Coming into the NHRA Toyota Nationals, Ron Capps and his Don Schumacher Racing Dodge Charger held a narrow lead over Robert Hight and his John Force Racing Chevrolet Camaro. Capps and his DSR Dodge-driving teammates had hoped to use the stop in Las Vegas to continue their dominance of the funny car class, and they got off to a great start.

Ron Capps came off of the trailer fast, laying down a 3.916 at 325mph to claim the top spot in the first round of qualifying while championship rival Robert Hight sat 14th. Meanwhile, the other Don Schumacher and John Force Racing funny cars to turn in strong first-round runs included Matt Hagan (4th quickest) and John Force (5th), but Jack Beckman, Tommy Johnson Jr, Courtney Force and Hight all turned in disappointing first qualifying runs.

That all changed in the second round, as Jack Beckman ran a 3.867 to take the top spot, Courtney Force ran a 3.878 to grab second and Hight ran a 3.880 to move into third. Capps slid to sixth, Hagan to eighth and John Force dropped to 12th.
The order of the top three wouldn’t change during the final two rounds of qualifying, but Hagan was able to move into fourth and Capps held onto sixth.

In the first round of eliminations, only one driver from Don Schumacher Racing or John Force Racing failed to advance to the second round, and that was Ron Capps. In what could prove to be a devastating blow to his championship run, Capps lost to John Force when his Dodge Charger ran into problems around half track. Beckman beat Jim Campbell, Tommy Johnson Jr beat Jonnie Lindberg, Hagan beat Gary Densham, and Courtney Force beat Jeff Arend – but Ron Capps lost.

In the semis, Jack Beckman held the starting line advantage, but when he ran into problems, Hagan took the win while Courtney Force destroyed teammate Robert Hight to advance to the finals.

In the final round, Matt Hagan pulled the holeshot advantage and never looked back – beating Force’s Camaro with his Dodge Charger for his fourth win of the year.

Coming into Las Vegas, Ron Capps held a 24 point lead over Robert Hight. By losing in the first round while Hight lost in the third round, Capps fell to second in the championship race as Hight took a 15-point lead.

This means that at the NHRA Auto Club Finals in Pomona, California, Capps needs to go to the late rounds and he needs to hope for Hight to lose early. Should Capps win the final event, he should win the title, but the 2017 NHRA Funny Car Title is likely going to come down to which of those two drivers finishes better in the final event.

LG's New EV Battery Plant Is a Welcome News for Tesla
Tesla Giga Berlin's New Hurdle: It's Not Only the Gov't, but Now Tesla Itself
END_OF_DOCUMENT_TOKEN_TO_BE_REPLACED