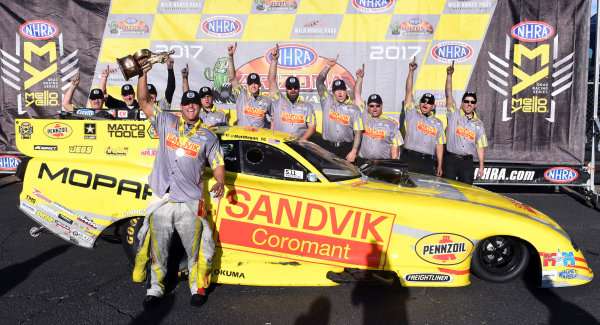 This past weekend brought about the second event of the 2017 NHRA season and for the second time this year, Matt Hagan drove a Don Schumacher Racing Dodge Charger to the top of the ladder in the Funny Car class – beating 2016 champ and teammate Ron Capps in the final run.
Advertisement

This past weekend, the teams of the NHRA Mello Yello Drag Racing Series rolled into Wild Horse Pass Motorsports Park in Chandler, Arizona for the NHRA Arizona Nationals with the Don Schumacher Racing Dodge Chargers being the odds-on favorites in the Funny Car class. Matt Hagan and his DSR Dodge Charger started the 2017 NHRA racing season with a record run and a big win over one of the John Force Racing Chevrolet Camaros in the first event of the season, so after dominating the class for the past few seasons – the DSR cars are always favored to win.

The Arizona Nationals were a clear example of why the Don Schumacher Dodge funny cars are favored to win – because they usually do win.

Qualifying
In the first round of qualifying, the DSR Dodge Charger funny cars came flying out of the trailers, with Tommy Johnson Jr, Jack Beckman and Matt Hagan all turning in 3.8X runs. The only other car to run in the 3.8 range was Courtney Force in a JFR Camaro – who actually ran the quickest run in the first round of qualifying – so after everyone’s first pass, a Camaro led the funny car field.

In the second round of qualifying, Tim Wilkerson, Robert Hight, Del Worsham, Matt Hagan and Tommy Johnson Jr all ran in the 3.8X range, but none of them were quick enough to jump ahead of Courtney Force, so after two rounds of qualifying - there was still a Camaro on top.

That would continue through the third round as well, as lots of cars in the Funny Car class ran a 3.8X pass, but none of them would jump ahead of Force’s 3.838.

That ended in the final round of qualifying, when Tommy Johnson Jr laid down a 3.837 – edging Force by 1 thousandth of a second and grabbing the top qualifying spot in the class.

Eliminations
In the first round of eliminations, things went well for Don Schumacher Racing, with Johnson beating Phil Burkart, Hagan beating Cruz Pedregon and Ron Capps beating Jeff Arend while Jack Beckman lost to Gary Densham. Courtney Force, after looking so strong in qualifying struggled in the first round, losing to Jim Campbell while John Force lost to Tim Wilkerson – leaving Robert Hight as the only JFR Camaro to make it out of the first round.

In the final four, Matt Hagan turned a slight starting line advantage into a win over Johnson while Ron Capps easily beat Jim Campbell – setting up yet another shootout between Matt Hagan and Ron Capps.

In the final round, Matt Hagan jumped out to an early lead and never looked back, edging out his teammate Ron Capps for win #2 on the season.

The teams are off until March 16th, when they head to the Gatornationals in Florida, where the Don Schumacher Racing Dodge Charger funny cars will continue to be the favorites in the class.