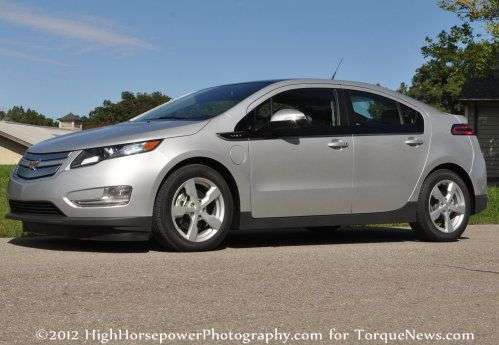 General Motors finished the year with a December that showed overall growth by the company and the claim of being the top selling automaker in the US even though three of the four existing brands saw negative growth in the last month of 2011.
Advertisement

The four core General Motors brands combined for a total improvement in December but unfortunately, three of the four brands showed negative growth compared to the same month one year ago. Luckily, with the Chevrolet brand seeing a boom in Cruze and Volt sales, Chevy was able to pull the whole company into the black for December 2011. That slight decline by Buick, Cadillac and GMC didn’t prevent General Motors from taking the title of being America’s #1 automaker for 2011 – moving 2,503,820 vehicles and besting 2nd place Ford Motor Company by over 355,000 units sold.

Chevrolet was the only GM brand to show positive growth in December 2011 with a 9% increase over December 2010 and with 161,158 vehicles sold last month, Chevrolet was the second strongest brands in terms of sales volume – trailing only the Ford brand (201,737). Chevrolet’s growth was led by the Volt, which sent out 1,529 units for an improvement of 369% over December 2010…which was the first month the Volt was available to the general public. The Chevy Cruze was second in growth through December with an increase of 54% as 16,675 new C segment sedans left the dealership and the full sized Suburban sport utility vehicle was third in growth with a jump of 39% over the previous year. As is usually the case, Chevrolet sales volume was headed by the Silverado which sent 47,787 new trucks out into the world en route to being the second bestselling vehicle in the US for the 2011 calendar year (again, trailing only the Ford F Series). The Equinox was second in total sales with18,195 units sold and the Chevy Cruze rounded out the top three with 16,675 sedans sold in December.

Of the three GM brands that showed a negative growth last month, GMC was the strongest with a drop of less than one half of 1%. The Savana van led the brand of trucks, vans and SUVs with an increase of 120% over December 2010. The plus sized Yukon XL was second with a jump of 24% while the smaller Yukon was up by 2%. In terms of sales, the top performer from GMC was the Sierra pickup, with 16,495 trucks sold last month. The Terrain small SUV was second in sales with 7,724 units sold and the Acadia midsized SUV was third in sales with 7,355 units sold.

Next in line was Cadillac, with GM’s luxury brand seeing a drop in sales of 3% in December 2011. Cadillac had two models show positive growth – the SRX which improved by 25% and the CTS lineup that saw a 5% increase. The Cadillac SRX was also the top model in terms of sales with 7,324 SUVs sold while the CTS lineup was second with 5,420 and the standard full sized Escalade was third in sales with 1,890 vehicles sold in December. While things might look down for Cadillac right now, with the new ATS expected to be unveiled next week at the 2012 Detroit Auto Show and the new XTS premium sedan set to launch later this year – things are sure to improve for Cadillac throughout 2012.

Last but not least was the Buick brand, which saw a drop of 12% compared to the same month in 2010 while also selling the fewest vehicles of any GM core brand. Like Cadillac, Buick had just two models showing positive growth as the LaCrosse sedan improved by 4% and the new Regal saw things improve by 1%. The LaCrosse also led the way for Buick in sales with 5,360 sedans sold while the Regal was also second with 3,086 sold and the Enclave was third with 5,555 vehicles sold in December.

General Motors finished 2011 with a month of improved sales compared to the last stanza of 2010 and with a handful of new models including the new Chevy Malibu, the new Buick Encore, and the Cadillac ATS and XTS – 2012 could be another great year for the General.