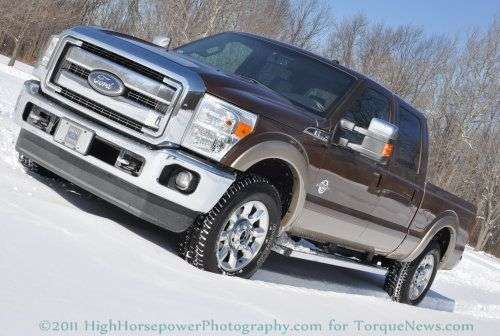 Sales numbers for 2011 have taken some time but with every major automaker reporting, the Ford F Series is once again the bestselling vehicle in the American auto industry - followed by the Chevrolet Silverado and the Toyota Camry – with those three top spots mirroring the top three from the 2010 sales year.
Advertisement

Even though we are constantly plagued by the idiots who insist that rising fuel prices will crush the American truck segment as a whole, we see that once again that the two bestselling models in the US are full size trucks. The Ford F Series won by a very comfortable margin with 584,917 trucks sold compared to just 415,130 examples of the Chevy Silverado sold last year – a gap of almost 170,000 units. The Toyota Camry fought through a massive shot to its reputation via the unintended acceleration lawsuits to once again finish third with 308,510 sedans sold, making the Camry the bestselling car in America once again. The Nissan Altima was fourth in sales in 2011 with 268,981 sedan and coupes sold after finishing just 7th in total sales in 2010 while the Ford Escape proved to be America’s bestselling sport utility vehicle in 2011, showing up in 5th place on this year’s list with 254,293 units sold. Also, like the murmurs that the sport utility vehicle is fading away, the Escape jumped from 13th place in 2010 to 5th place in 2011 – making it the bestselling SUV in all the land.

Korean automaker Hyundai saw their Elantra and Sonata return to the top 20 list for 2011 but both of these models increased from where they appeared on the list in 2010. Finally, Nissan, Volkswagen and the Chrysler Group each had had one representative on the list with a pair of cars from Nissan and VW while the Chrysler Group saw their Ram pickup move up two spots from where the Ram finished in 2010. Names not on the list for 2011 that were included on the 2010 list of top movers are the Toyota Prius and the Subaru Legacy – both of which can look to the impact of the Japanese disasters earlier this year as well as increased competition for the cause of their dropping out of the top 20 selling models in America.

Below is the complete list of the top 20 bestselling models in America for the 2011 model year. The number and parenthesis is the 2010 rank for the given vehicle. Congradulations to Ford Motor Company for once again offering the bestselling vehicle in America!

Toyota's First EV Will Have a Name of BZ: Toyota BZ
First Videos From Inside The Boring Company's Las Vegas Loop
END_OF_DOCUMENT_TOKEN_TO_BE_REPLACED