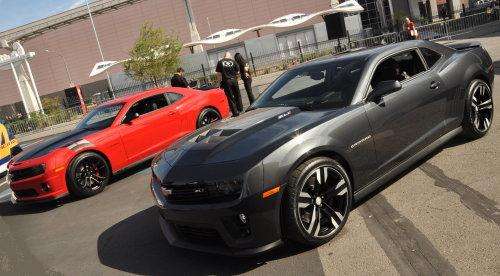 Sales numbers for December and the rest of 2011 are in and for the second straight year, the Chevrolet Camaro has claimed for title of being the bestselling muscle car in the American automotive industry – beating out the Ford Mustang and the Dodge Challenger by a very comfortable margin as the Camaro claimed its first back-to-back sales title in decades.
Advertisement

In December 2011, the Chevrolet Camaro was once again the bestselling muscle car in America, selling 6,754 units – an increase of 20.3% compared to the last month of 2010. This marks the 7th straight month that the Camaro has outsold the Ford Mustang and Dodge Challenger and out of the 12 months of 2011 – the only month where the Camaro did not win the sales battle was when the Mustang bested the Camaro by less than 400 units. Other than that month, the Chevrolet Camaro has been by far the most popular American muscle car and by year’s end, General Motors had handed out an impressive 88,249 Camaros; accounting for an 8.5% increase over the number of Chevy muscle cars sold in 2010.

The Ford Mustang moved 5,057 units last month, which brought about a decline of 7.2% compared to December 2010. Even though Ford introduced two powerful new engines that allowed the Mustang to outperform the Camaro (while also costing less), the 3.7L V6 and 5.0L V8 were not enough to help Ford reclaim its title of having the bestselling muscle car in America. In addition to seeing a decline in year over year sales (December 2011 compared to December 2010), the Mustang also saw an overall decline in sales from the 2010 to 2011 of 4.4%. With just 70,438 units sold in 2011, the Mustang was the only one of the three American muscle cars to see a decline in sales compared to the previous year.

Last but most certainly not least is the Dodge Challenger, which continued to push forward with 3,284 beefy Mopar muscle cars sold in December 2011. This accounted for a 1% decline compared to December 2010 but more importantly, the Challenger showed positive growth with annual sales of 39,534 giving the smallest of the Big 3 a 7% increase over the 36,791 Challengers sold in 2010.

The Ford Mustang had outsold the Chevrolet Camaro (and Dodge Challenger) every single year from 1986 through 2009 but in 2010, the Camaro was the top dog in terms of muscle car sales in the US for the first time since 1985. The Camaro backed that 2010 victory with a string of very strong months in 2011 – outselling the competition through the first 5 months of the year. The Mustang battled back in June, besting the Camaro by around 400 units sold but after that, it was all Camaro. Chevy took the title for the bestselling muscle car every month from July through December and in doing so – General Motors secured their second straight title of offering America’s bestselling muscle car.

You may notice that, unlike past months, I have not said much about the Nissan 370Z. Even though the 370Z doesn’t offer the powerful V8 that we find in the engine lineups of the Camaro, Mustang and Challenger, the sporty design of the “Z car” puts it in direct competition with the American muscle cars. However, after finishing dead last every month in sales compared to the other three and just selling a total of 7,328 units all of last year (a decline of over 28%), I plan to omit the Nissan from future comparisons until it becomes more competitive.

Below is a list of the various articles highlighting muscle car sales over the course of the 2011 calendar year. You may notice that there is no October because when sales figures came out, I was busy covering SEMA in Las Vegas but for the sake of argument, the Camaro outsold the Mustang by a margin of 6,119 units to 4,898.