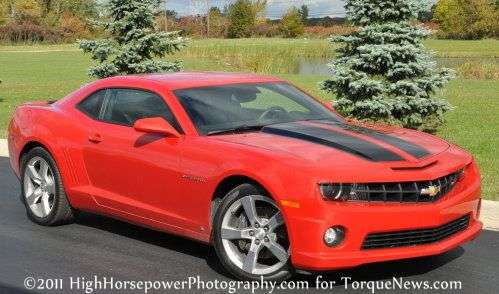 Camaro beats the Mustang, Challenger and 370 in August 2011

The Chevrolet Camaro once again lead the segment in sales, with the Chevy muscle besting the Ford Mustang, Dodge Challenger and Nissan 370Z through August 2011 – the 7th time Chevy has lead the segment out of the 8 months of 2011.
Advertisement

In August 2011, the Chevrolet Camaro moved 6,823 coupe and convertibles for an improvement of 7.9% over the same month in 2010, although that total presented a decline from the month before when GM moved 7,671 muscle cars. For the year, General Motors has delivered 63,255 Camaros so not only has it led 7 or the 8 months of 2011 but it also holds a very comfortable lead of almost 11,000 units over the Mustang. Based on the current sales figures, GM could stop selling the Camaro for November and December and they would still have a great chance of beating the Mustang in annual sales for the second year in a row. Before 2010, the Camaro hadn’t outsold the Mustang since 1985.

The Ford Mustang moved 5,718 units in August 2011 – an increase of 2.7% over the same month in 2010 but compared to July, the Mustang saw a decline of roughly 1,100 units. The Ford Mustang offers less power than the Camaro but thanks to Ford’s efforts in suspension and chassis technology, the Mustang is just as fast (if not faster) than its cross town rival sporting the bowtie. Even with that and the lower price in mind, the Mustang continues to trail the Camaro from month to month.

The Dodge Challenger was once again the third ranking vehicle in the class, with 3,159 brawny muscle cars sold in August 2011. This offers a decline of 4.1% from last August as well as a drop of roughly 350 units from Jul 2011. The Challenger is the slowest selling of the Big 3 muscle cars but the retro designed Dodge has consistently been in the 3,000-3,800 unit range over the past 18 months and according to the folks from Chrysler, steady sales are good enough for them – especially considering the fact that it costs more than the Chevy and Ford pony cars. At a meeting with SRT brand CEO Ralph Gilles a few weeks back, he explained that they don’t care how many units Ford and Chevy sell as the Challenger (especially in SRT8 trim) is an elite vehicle and they like the fact that the lower sales brings about some automatic exclusivity.

Last and, well let’s be honest, it’s the least too….is the Nissan 370Z. unlike the other three rear wheel drive performance models, Nissan doesn’t offer a V8 so it is at a massive disadvantage to the American muscle cars and sales reflect that. Nissan sold just 517 copies of the 370Z last month bringing about a total for the year of 5,612 – 106 units less than Ford sold Mustangs last month. The good news is that compared to other rear wheel drive Japanese sports models like the Mazda RX8, the 370Z is the crème of the crop. Remember, life is all about those little victories.

Congrats to GM, as it looks like the Camaro is gearing up to lead the segment for the second year in a row unless Ford comes up with some sort of miracle.

Other Muscle Car News:
The Camaro bests Mustang in 2010 annual sales
The Camaro outsells the Mustang, Challenger, 370Z in July 2011
Design chief says next Ford Mustang will be all American muscle
EcoBoost Mustang confirmed by Bill Ford Jr.
The Ford Mustang plant could be in trouble

David O. wrote on September 2, 2011 - 10:04pm Permalink
Do you want to extend the time frame out 10 years! Just saying there is still a huge pent up demand for the Mullet!
Anonymous wrote on September 26, 2011 - 11:00pm Permalink
yea butt the slomaro lovers have'nt had a slomaro for like what 10 years i mean the last slomaro sold was either rebuilt or junked in what maybe 04-05 the ones i see are rebuilt twice over atleast edelbrock this and edelbrock that the only thing left gm is the firing order and thats not even gm in some now that the aftermarket is useing the 351 firing order ,plastic fenders cracking falling apart , doors dragging the ground , overheating, dash bouncing like a yo-yo . so just wait sales will drop as soon as all the the aftermarket suporters get their new slomaro's

Tesla-Funded Research Reveals One of The Biggest Mysteries of EV Battery
Tesla Tesla Buyer Nets a Whopping $12,000 Discount After Asking for Reduction
END_OF_DOCUMENT_TOKEN_TO_BE_REPLACED