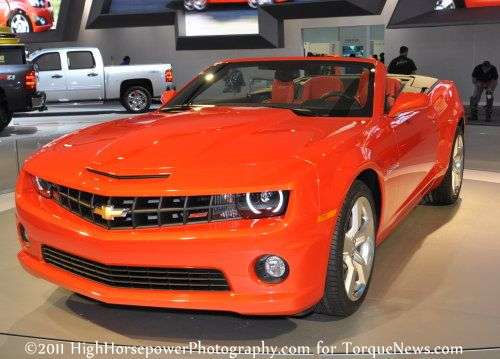 The Camaro roughs up the Mustang and Challenger in February sales

Sales numbers are in from February 2011 and for the second month in a row, the Chevrolet Camaro has outsold the Ford Mustang and Dodge Challenger, each by a ratio of nearly 2 to 1.
Advertisement

The Chevrolet Camaro was the best of the American muscle cars in terms of sales with 6,245 units sold in January but the bad news was that this number of cars sold is February is a decline of 3.7% compared to the Camaros sold in February of 2010. We can likely blame this decline in sales from 2010 to 2011 on the now-rising gas prices, especially during the snowy winter months in the north but the bright side is that this month’s numbers for the Camaro are up quite a bit from last month’s 4,763 units sold. Now that the Chevrolet Camaro Convertible has begun production, those models should begin helping the Camaro maintain its lead over the Mustang and Challenger as the drop-top Chevys hit the streets.

The Ford Mustang showed a massive decrease in sales in February 2011 compared to February 2010, with a combination of rising fuel costs combined with the fact that last February, Ford was still selling heavy discounted 2010 models once the 2011 models were available. This helped Ford to sell a great many Mustangs this time last year but regardless of the variables at fault, Ford moved just 3,697 Mustangs last month. This is a decline of almost 28% from last February but it does represent an improvement of over 500 units compared to January 2011 so things look to be on the rise amidst the rising gas prices.

Ford can expect to see the Mustang benefit from the production of the new Boss 302, as those limited edition high performance Mustangs are practically all sold before they are built, basically guaranteeing Ford a jump in sales at some point, albeit a small one.

Perhaps the biggest surprise of the February 2011 muscle car sales is the Dodge Challenger. While the brawny retro coupe is still in third place out of three, with 3,227 units sold last month, the Challenger is as close to the Mustang as it has been since returning to the scene a few years ago. Last month’s Challenger sales accounted for an improvement of 50% over February of 2010 as well as a gain of over 700 units from January 2011 – showing an improvement of 28% through the first two months of the year.

Gas prices over the next few months could have a heavy hand on the number of American performance coupes and convertibles sold through 2011 but even with rising fuel prices, Detroit’s muscle cars continue to hold steady.