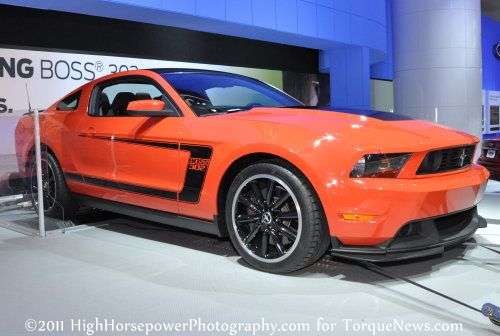 Mustang battles back, beats Camaro, Challenger and 370Z in June 2011

The Chevrolet Camaro has led in the rear wheel drive sports car segment over the Ford Mustang, Dodge Challenger and Nissan 370Z from January to May but as June 2011 sales results have trickled in – the Ford Mustang has claimed the top spot in sales for the month.
Advertisement

The Ford Mustang and Chevrolet Camaro have gone head to head all year, and while Ford has been close a few times General Motors has lead the segment in the first five months with the Camaro. In June 2011, Ford sold 8,835 Mustangs – a decline of 1.5% compared to June 2010 but this number was still enough to put the Mustang back on top of the muscle car class. Ford sold just 6,607 Mustangs in May so with 8,835 pony cars in June, the company saw a huge increase over the previous month while the Camaro dipped in sales from May to June. Overall, the Ford Mustang has moved 39,041 units in 2011 - trailing the Camaro in annual sales by a margin of almost 10,000 units. Even with that in mind, Ford can stick their chests out a little knowing that they broke GMs 5-month shutout.

The Chevrolet Camaro was the second best model in the rear wheel drive performance car class with 8,486 units sold last month. This was a decline from the 9,451 Camaros sold in May but year over year (comparing June 2011 to June 2010), the Camaro saw an improvement of 12.5% last month. June marks the first time this year that the Camaro has not led the segment and with the recent introduction of the Camaro Convertible – I am pretty surprised to see the Camaro sales dip like they did.

The Dodge Challenger was, as is usually the case, the third vehicle in the class in June 2011 sales with 3,384 units sold last month. This accounts for a 10% increase over June of 2010 so it shows improvements with the 2011 model year revisions (a new V6 and premium 6.4L Hemi in the SRT8 models) even though the Challenger did drop slightly from May to June. The Challenger tends to hover in the mid-3,000 unit range and in speaking with Chrysler officials, the company is pretty happy with the sales figures from the brawny muscle car.

Once again, the Nissan 370Z pulled up the rear in the segment but with no V8 option, it is not a fair comparison between the American muscle cars and the 370Z. Nissan sold just 644 Z-cars last month – a decline of 28% over June 2010 as numbers from the Nissan sports coupe and convertible continue to slide.