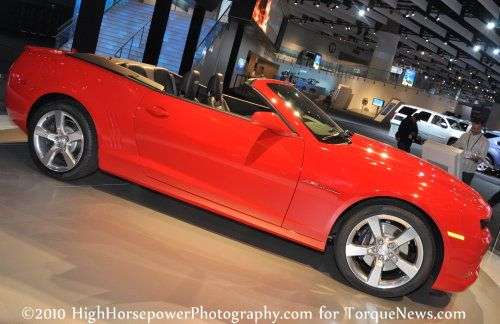 The Camaro leads the Mustang, Challenger in November sales

Thanks to the folks at Dodge, the modern horsepower war is about to heat up even more with the 470hp Challenger SRT8 392 but for now, the Chevy Camaro claims to the top spot in the muscle car class.
Advertisement

In the month of November 2010, Chevrolet delivered 4,164 Camaros, narrowly beating the Mustang which sent out 4,093 new pony cars. As has been the case over the last year or so, the Dodge Challenger came in third place with just 2,497 units sold in November.

Based strictly on these numbers, it is likely that a great many GM and Chevy fanboys are pounding their chest over their supremacy of the segment but there is a bit of bad news as well for the bowtie boys. The Camaro sold more units than its cross-town competitors but with just 4,163 units sold, the Chevy performance car saw a decline of 40% over November of 2009 as the new, more powerful Ford Mustang has clearly cut into the sales of the Camaro. On the other hand, the Ford Mustang saw a gain in sales of 13% over last November and the Dodge Challenger showed a 22% improvement over last November.

These numbers can be interpreted in a variety of ways, and it is important to point out that last November, the Ford Mustang offered a 210hp V6 and 315hp V8, where the current Mustangs churn out 305 and 412hp, respectively. This explains why the Mustang has become more popular but for the Challenger, which hasn’t received any major changes since being introduced in 2008, the fact that it continues to show year over year sales growth speaks volumes of the popularity of Dodge’s muscular coupe.

We can expect things to improve further for the Challenger as the anemic 3.5L V6 has been removed to make room for the new 3.6L Pentastar V6, which offers more power and torque than the outgoing base model engine. The 2011 Challenger will also feature a new, more powerful 6.4L Hemi engine in the SRT8 trimline, featuring more power and better fuel economy than the outgoing 6.1L Hemi. While the addition of more horsepower to the top of the line Challenger isn’t likely to increase sales enough to put the Dodge up there with the Camaro and Mustang, the new V6 should increase base model sales and the fact that Dodge has lowered the price of the 5.7L Hemi-powered Challenger R/T could help get the sales figures closer to what Ford and Chevy see from their muscle cars.

The Camaro is expected to receive a high performance Z28 trimline in the near future and while that high powered, high priced Camaro likely won’t make much of a difference in sales figures, the addition of the Camaro Convertible to the lineup could snag some sales from Ford.